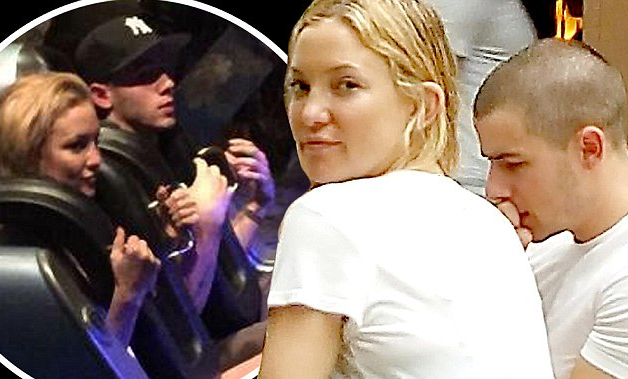 Strangest Story Of The Year So Far: Kate Hudson Posted Photo Of Her Butt On Instagram To Make Nick Jonas Jealous? Are you ready for this? I don’t think you are. Those special gossip “sources” come up with some pretty wild and entertaining stories, but this one just might be the most creative. According to a source who talked with Us Weekly, Kate Hudson wanted to make Nick Jonas‘ Jealous song come to life.

I’ll explain what I mean by that in a minute, but let’s first take a trip back to October 2015. We posted a story about the rumored romance between 23-year-old Nick Jonas and 36-year-old Kate Hudson. They were allegedly enjoying nice dinners together, traveling and having fun at some amusement parks. And Hudson was even asked about the relationship during an interview with Andy Cohen. Sadly, she neither confirmed nor denied the rumors.

After October, whatever relationship they had appeared to fizzle out. But this new source is painting a different story. This source claims Hudson wasn’t ready to end her sexual relationship with Mr. Jonas. She wanted more. And how did she plan to get more? By seducing him on Instagram, of course! We can’t show you the photo here, but you can click this link to check it out. In the photo, Hudson can be seen showing off her soapy butt in a bathtub. The sexy photo was posted by her stylist Sophie Lopez, and at the time, Hudson commented on the photo saying, “Omg! You’re so fired! #Fabletics ?”

But this source claims it was a calculated move. The actress told her stylist to snap and post the photo, in hopes Nick would see it and remember what he’s missing.

Seems a little far-fetched, right? She could have just sent the photo directly to him. I don’t know…it’s possibly the source is correct, because the two stars did recently go on a ski trip together earlier this month. Hopefully Nick was able to keep that booty warm.