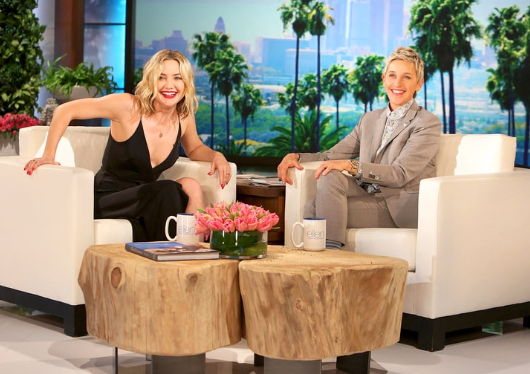 The talented and beautiful Kate Hudson got a little uncomfortable recently during a taping of The Ellen DeGeneres Show. During the interview, Ellen decided to get personal with the actress because that is Ellen’s specialty. The host knows exactly how far she can push things.

And she certainly pushed things to the limit with Hudson. She straight up asked the 36-year-old actress who she was dating right now, obviously trying to figure out how serious her rumored relationship with Nick Jonas is. Kate immediately started laughing when Ellen asked the question, and then she answered with an extremely awkward, “I am…nobody?”

Ellen then pushed things a little more and was able to get Kate to admit she was dating, but that’s all the information she was willing to give.

Check out the hilarious moment below…

Hmmm. It definitely seems like she was trying to hide something there. I think this “fling” between her and Nick Jonas is actually more serious than we all think.

Last month during an interview with Complex magazine, Nick was asked if he’s ever had sex with Kate. He replied by beautifully dancing around the question…

We had an unbelievable connection as two humans who just admire things about each other, and see something in each other that’s beautiful. Out of my best effort to respect her and her privacy, I’m not going to say if we had sex or not. But we did have a beautiful connection. Even now I have so much admiration and respect. She’s amazing.

And you might notice he’s using past tense to describe their unbelievable connection, which makes it seem like whatever they did have is now over. But this interview took place a month or two ago, when they were allegedly taking a “break” from each other.

The break appears to be over now though. Last week they were spotted on a little dinner date together in Los Angeles.