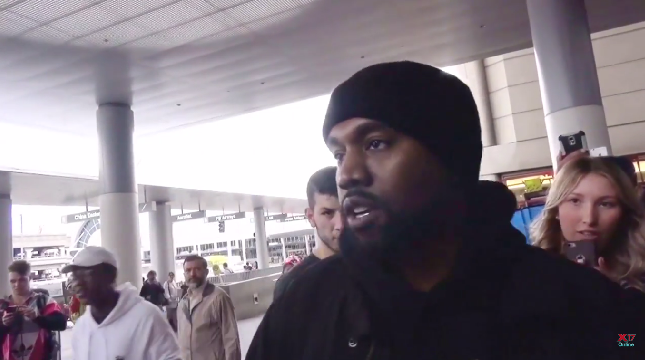 Take A Ride On ‘Roller Coaster Kanye’ As He Talks To The Paparazzi In A Completely Normal Video No One Wants You To See! I’ll admit I was about to demand a refund for my ticket to Kanye West Land after he went on Twitter asking for money and saying all kinds of narcissistic sh-t. And then you add the drama with Taylor Swift and Saturday Night Live. I was beginning to let the media convince me Kanye was this horrible person who only cared about himself.

And I’ll be honest, I still think he’s incredibly self-centered, but that’s just something you’ll have to accept if you want to visit the wonderful land of Kanye. Because he’s not a terrible person, it’s just that’s the only thing the media wants you to focus on.

When Kanye gets real? When he starts making sense? They don’t report that. It doesn’t fit their narrative. Truth is, every celebrity has their bad days, it’s just Kanye’s bad days are more entertaining, so they end up getting spread around the web like two girls playing with one cup.

I think we should start spreading around the normal Kanye though, because the normal Kanye actually has some interesting things to say. He talked with the paparazzi on Wednesday to explain his $53 million debt problem and talk about Taylor Swift.

If you’re a Kanye hater, you’ll probably be surprised by what he had to say…

Now some of you might be saying, “This is just an act!” And I understand where you’re coming from. He certainly didn’t seem this respectful and thoughtful on Twitter when he was begging for cash like he was out in the street with no shoes on his feet. But I think it’s just a situation where he gets so excited about his dreams that he doesn’t realize or worry about how arrogant and disrespectful he might sound in the moment.

Do you need more proof? Take a look at the video below and skip to around the 1:21:00 mark. The whole video is worth the watch when you have time. If you have a Kanye hater in your life who is being controlled by the media, send them this video and maybe they’ll change their mind.