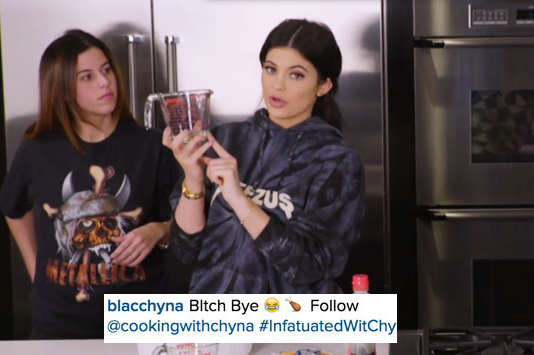 Tyga Defends Kylie Jenner After Blac Chyna Throws Some Shade Her Way, Get All The Latest Drama Inside! We told you it was going to happen. The Kardashian/Jenner family is slowly crumbling, and it’s all thanks to that sneaky (and now lean) Rob Kardashian. He felt like most of his family abandoned him during his time of need, and now that he’s getting back on his feet, he’s ready to make those fake fools feel some pain.

He’s doing this by dating Blac Chyna. You should know all about this story by now if you take your celebrity gossip game seriously. If you’ve been slacking off lately, you can click here to catch up on their relationship and the drama they have already caused.

But now things are starting to get even more heated…literally. In the kitchen. You see, Kylie Jenner promoted her new ‘Cooking With Kylie‘ web series on her Instagram account yesterday. This upset Blac because she had started a Cooking With Chyna web series in December of last year. She decided to throw some shade at Kylie by posting a screenshot of her already successful cooking show, and writing “Bye bitch,” as the caption followed by a sarcastic crying smiley face and a chicken drumstick emoji.

And by the way, yes I am shocked I am actually writing “chicken drumstick emoji” in a freaking article. 2016, right?

Anyway, Chyna apparently deleted the photo a few hours after she posted it, but she didn’t take it down fast enough because Kylie’s boyfriend (and Blac’s ex) Tyga saw the post and decided to upload the two snaps you see at the bottom of this page.

In the short clips, he actually makes a lot of sense…

2016. Motherf—kers gotta stop acting like they invented every motherf–king thing out here. Everything’s already been done.

He’s got a point. It’s a freaking cooking show, Blac. You didn’t invent cooking on camera. It would be like us trying to claim we invented the gossip genre.

But like we said, this is something we saw coming. Rob knows exactly what he’s doing. His family is worried Blac is using him? Hell no. He is using her! People need to start giving this dude more credit.