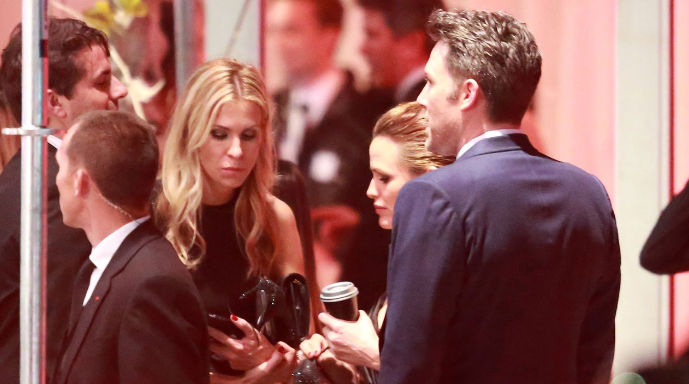 Jennifer Garner And Ben Affleck Were At The Same Oscars Party Last Night, Was There Any Drama? It’s happened to us all, right? You break up with your spouse because they were banging the hot nanny behind your back, and then several months later you run into them at an Academy Awards after-party! Totally happens all the time.

Last night, Ben Affleck and Jennifer Garner decided to attend Vanity Fair’s after-party, and it’s safe to say all eyes at the party were focused on the two stars. Would they talk to each other? Would Jennifer attempt to poison Ben’s drink?

Those are both great questions, and thanks to a few lovely sources, we can answer them. The sources claim there was no bad blood between the former lovers.

In fact, they even talked with each other…

They spoke for a little and then went about their own business with the people they came with. Jen smiled and Ben was very normal, from the way it looked. Their facial expressions were not awkward at all. It seemed like they were more like friends. Ben and Jen did not have any bad blood towards each other at the Vanity Fair party.

Of course that doesn’t mean much of anything. They are actors. We are sure they can fake it for a few minutes. Heck, I’m a terrible actor, but I’ve managed to make it through over 20 Thanksgiving dinners without telling my cousin that I hope he chokes on that piece of bread he’s shoving inside his mouth.

Anyway, Ben and Jen weren’t the only exes at the fancy party. Nick Jonas and Kate Hudson showed up at the party separately. Sources claim they didn’t speak to each other during the event, which could mean their break-up was nastier than we thought, or they’re still secretly dating and they don’t want anyone to know.