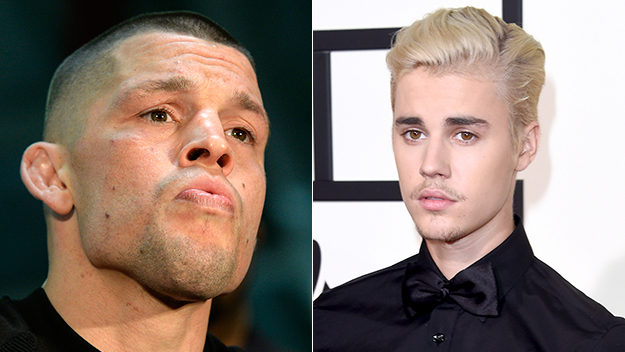 Justin Bieber might be a decent singer, a good dancer and a great carpool karaoke guest, but he’s not and will never be a professional fighter. So he might want to think twice before starting a feud with someone like Nate Diaz.

It all started after the Biebs posted a video of a toast he made to Conor McGregor following his shocking loss to Diaz last weekend. “To McGregor. He’s still the champ. That broke my heart.” He said in the video, which would have been fine had he stopped there.

But he decided to add this caption…

No bandwagon but Conor is a true champion, fights with style and finesse, all the respect to Nate but his style is terrible. Nate has crazy heart respect.

We’re not exactly sure what Bieber means by “style,” but we’re hoping he was talking about Nate’s fashion style, because his fighting style is one of the best. I mean, are we forgetting that he received his Brazilian jiu-jitsu black belt several years ago? You don’t earn a black belt in BJJ with a “terrible” fighting style.

Just look at how the Conor fight ended…Diaz choked his a** out!

Anyway, Diaz heard about Bieber’s comments, and he decided to fire back by posting the hilarious image you see below, with the caption, “Biebers a hater.” Bieber better hope it’s not too late to say sorry now. His next carpool karaoke video might be coming from the back of an ambulance.  If they do fight, we have the tale of the tape: