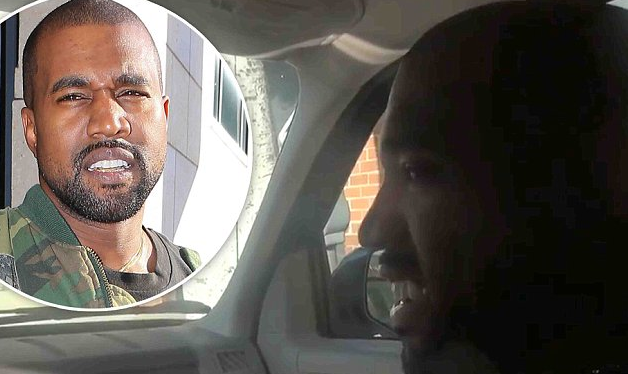 Hate Kanye West? You Might Change Your Mind After Watching This Video Of Him Ditching Uber And Riding With The Paparazzi! You either love Kanye West or you hate Kanye West. It’s been said a million times, but it’s never been more true for a celebrity. Some people would drink this dude’s sweat, and some people simply want to punch him in the face.

We don’t like all the arguing between the Kanye lovers and the Kanye haters, so we’re going to show you a video that might make everyone come together and love Kanye. The rapper was waiting outside for an Uber on Tuesday, and he appeared to be getting a little concerned that the vehicle hadn’t shown up already.

And of course, a photographer was right there to film everything. The paparazzo was trying to ask Kanye questions about Donald Trump and Hillary Clinton, but Kanye shut him down politely, “Where is this black sedan? Hang on one second.” He said while looking down at his phone.

Eventually, the paparazzo got brave and decided to ask Kanye if he needed a ride. He said his coworker would give him a “ride wherever you wanna go,” and surprisingly the 38-year-old star said yes.

“I don’t need Uber anymore. I just have the paps take me where I wanna go.” He said.

Watch the hilarious video below to see how he managed to convince the dude to turn off the camera during most of the ride.

Of course, Kanye might have made a mistake here. The paparazzi are going to be offering him rides all the freaking time now.

Paparazzo: Hey..don’t sweat it. My friend has an airplane. I can give him a call. The only thing is there isn’t a bathroom on board, so we all have to use a community bottle.