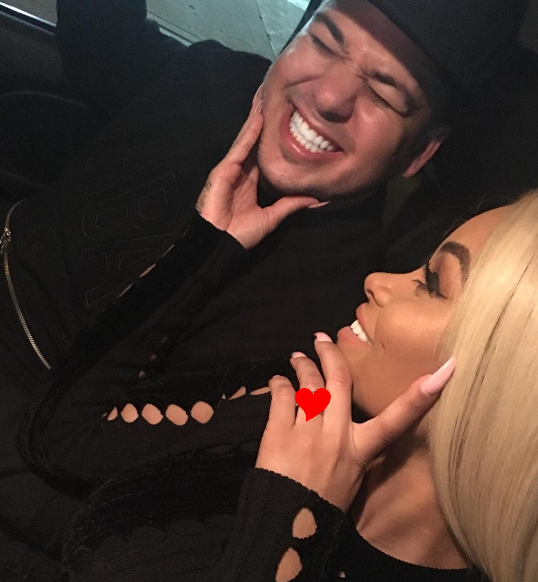 Rob Kardashian And Blac Chyna Are Now Engaged (Seriously) We Have Photos And Video Of The Massive Ring! Damn. Blac Chyna and Rob Kardashian aren’t wasting any time. They have only been dating for a little over two months, but apparently they already know in their hearts that they want to spend the rest of their lives together.

Rob popped the question on Monday night while Chyna’s mother was still in town. The 27-year-old model/business owner posted the photo you see below to her Instagram account with the simple caption: “YES !…!…!” As you can see, the diamond ring is HUUUUUUGE! According to TMZ, the couple celebrated their engagement by hitting up Ace of Diamonds strip club with her mother.

The timing is interesting because almost all of Rob’s family flew out of town on Monday for a family vacation. Makes you wonder if he specifically asked her after they left to avoid the drama. Or maybe they plan on joining his family after Chyna’s mother leaves. That’s not likely, but this whole freaking thing is unbelievable, so who really knows what might happen next.

But hey, Rob seems to be happy now and that’s the most important thing. This was a truly emotional moment for him.

In the Snapchat clips you see below, it looks like the 29-year-old reality star had been crying pretty hard.