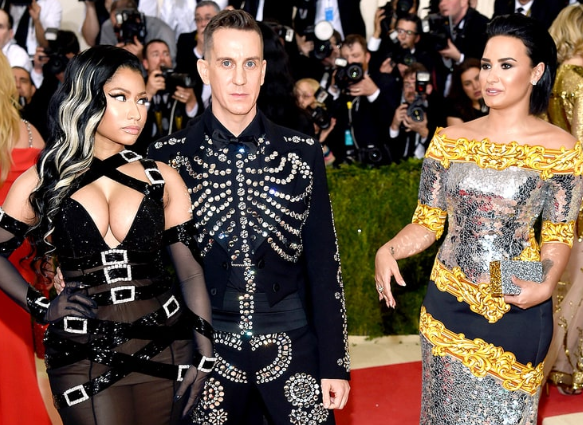 Demi Lovato Goes On Wild Late-Night Rant On Twitter, Asks Internet Trolls What Their Grandparents Would Think About Them! Twitter isn’t designed for lengthy rants, but Demi Lovato doesn’t give a fudge about the 140-character limit. She was in a strange mood, and she wanted everyone to know about it. But before we look at the entertaining tweets, let’s explain to you why she was/is angry.

There was a little bit of drama between Nicki Minaj and Demi Lovato recently when Minaj posted a photo of herself, Demi and Jeremy Scott. For some reason, Nicki tagged Scott in the photo, but she did not mention Demi.

Not long after the photo was posted, Demi went on her Snapchat and wrote: “When you aren’t mentioned in a post but didn’t do s–t to the person,” obviously she was a little salty. The 23-year-old singer then shared the hilarious photo you see below, which shows Nicki throwing some shade her way.

She wrote this caption, “This picture pretty much summed up my first and probably last met.” Homeboy in the middle is like, “Get me out of here!”

Anyway, all these signs point to Demi being genuinely upset at Nicki, but last night/early Thursday, Demi jumped on her Twitter account and blasted those naughty internet trolls for always assuming they know everything.

For some reason, Demi seems to believe the world is filled with wonderful, thoughtful and respectful people. That’s just not the case. You can’t waste your time on Twitter complaining about “cyber bullying,” because those people bullying you are just going to use your tweets against you.

Do you really think a person who would write, “YOU SUCK DEMI! I HOPE YOU CHOKE ON A HOT DOG!” would care about their grandparents finding out? Heck no. Their grandparents are the ones who bought them that super expensive smartphone they just used to insult you.

Just ignore them. Focus on the fans sending you supportive messages. You talk about the trolls wasting their time, why are you wasting your time talking about them? F–k them.