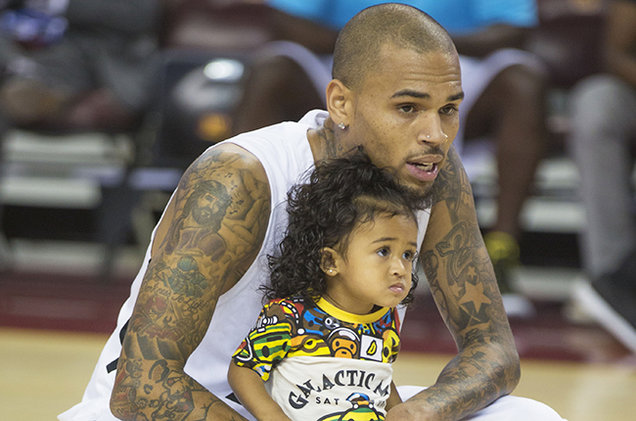 By now it’s no secret that Chris brown is a savage when it comes to social media.  However this time he has a point but then again…he doesn’t.  This is typical with Brown.  There is nothing but gray area.

He confronts his baby’s mother, Nia Guzman about an inappropriate picture of his daughter Royalty. The inappropriateness is very debatable although me being the father of my own 2 year old, I tend to agree with Brown on this one.  The issue that I have is, that by commenting on the photo, and him being Chris Brown, he has now given the photo that he didn’t like, more attention than it would have ever gotten before.

Here is the photo and the exchange.  Who are you riding with on this one?  Team Breezy or Guzman? To Brown’s defense, this might be the only way he could get Nia Guzman to listen.  And for those who are secretly making fun of Breezy for his use of the word “Risky” instead of “Risque”, check your bank account and then check Brown’s.  He has $30 million in his, he can spell anything anyway he wants. When it comes to Chris Brown, anything that is not related to getting arrested is good news. It’s been about a month and so far he has not found himself in any trouble, which according to my estimates might be a personal record.

He’s been traveling on his One Hell of a Nite Tour which is scheduled to last through September 19th, so I’m sure that is enough to keep him busy. I have to say, I’ve come 180 degrees in regards to Chris Brown so a story like this is refreshing.

Chris took time from his tour to talk with US Weekly. He put together a list of 25 things that we didn’t know about him.

I think it’s in bad taste and a professional courtesy not to copy the entire list here..at least that’s why I think that the other bigger, dare I say, “more established” websites don’t’ do it. I guess I would be pissed too if Chris Brown gave me the list directly and a more popular, more entertaining, more engaging website just posted it and took credit for it. (You see what I did there?).

That being said, I have pulled out the few things that not only didn’t I know but I found worthy of some discussion. I’m the only singer who has been incarcerated and had a No. 1 record at the same time.

While this might not be a bragging point per se, he might be correct. In 1995 2 Pac did it with Me Against The World and then Lil Wayne did it 15 years later with I am not a human being. Technically, they are not singers so Brown is correct. Bravo.

This explains a lot, including the most recent tattoo(s) on his head. I’m sure you saw the first one earlier this week, down below we have the 2nd, even crazier one. I own 14 Burger Kings

At first I didn’t think owning 14 Burger Kings was that big of a deal for a superstar millionaire….but then I did a little digging. It’s a pretty big deal. According to Burger King’s website, you have to have (Read More)
Categories
MUSIC
Tagged
Chris BrowninstagramNia GuzmanRoyalty