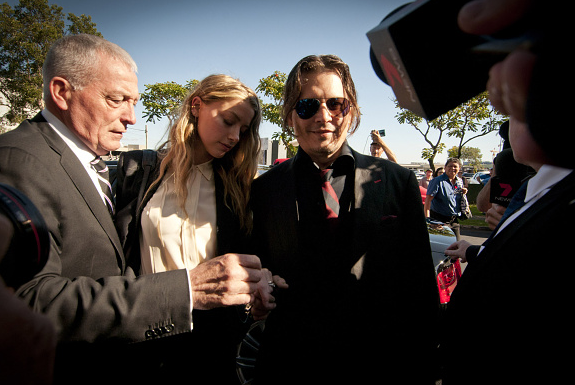 TMZ vs Amber Heard: Gossip Site Runs Story About How She Was Arrested Herself For Domestic Violence Back In 2009 It really is strange to see the battle going on between TMZ and Amber Heard. It seems like most sites are taking Heard’s side in the domestic abuse allegations she has made against Johnny Depp. After all, she does seem to have a lot of evidence to back up her claims.

But TMZ has been backing Depp hard from the start. They started off by reporting that the police who arrived at the scene didn’t see any signs of bruising on her face. The site also shared reports from two bodyguards who were allegedly standing right outside the room when the argument happened. Those bodyguards claim Heard let out a “fake” scream to make it seem like she was the victim.

And now, the gossip site is bringing up a 2009 domestic violence case against the actress. She was dating Tasya van Ree at the time. According to the reports, the two former lovers got in a heated argument at Seattle-Tacoma International Airport. At some point during the argument, Heard grabbed Tasya’s arm and punched her. Officers arrested Heard for misdemeanor domestic violence. She appeared in court the next day, but the prosecutor decided not to move forward with the case because both women lived in California.

Obviously by posting this report, TMZ continues to push their story that Depp is the real victim here. It’s fascinating to see such a huge site go against the grain, especially when dealing with such a sensitive topic.

One thing is for sure, friends of Heard are not happy about the stories being pumped out by the site. Photographer  iO Tillet Wright went on her Twitter account to defend her friend.

Check out her emotional response below…