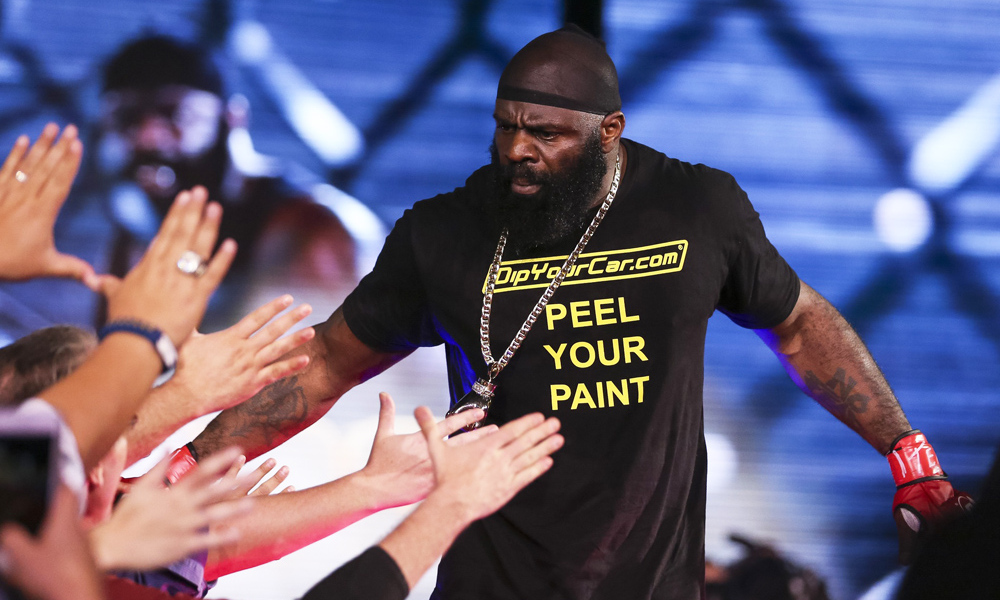 Wait! What? Kimbo Slice Dead at Age 42. Here’s What We Know. This is a total shock.  Kimbo was only 42 years old and was actually scheduled to fight James Thompson on July 16th at Bellator 158 in London.  In fact, he was the headliner.

Now a days when someone unexpected dies, we all think it’s a hoax.  No one wants to be the dumb-axx that posts on Facebook R.I.P. to someone that’s still alive.  Unfortunately this is real.  TMZ first broke the news that Slice was admitted to the hospital.  The only information we had was that he was admitted to the Northwest Medical center in Margate Florida and that his situation was dire.  It was soon announced that he had passed away.

Then to confirm matters officially both Bellator and the UFC put out statements:

We are all shocked and saddened by the devastating and untimely loss of Kimbo Slice, a beloved member of the Bellator family.

One of the most popular MMA fighters ever, Kimbo was a charismatic, larger-than-life personality that transcended the sport.

Outside of the cage he was a friendly, gentle giant and a devoted family man. His loss leaves us all with extremely heavy hearts, and our thoughts and prayers are with the entire Ferguson family and all of Kimbo’s friends, fans, and teammates.

UFC is saddened to learn of the passing of Kevin Ferguson, known to fans around the world as Kimbo Slice.

Slice will forever be a part of UFC history as a contestant on season 10 of The Ultimate Fighter in 2009, and for having fought twice inside the Octagon at The Ultimate Fighter Finale and UFC 113. He carried himself as a true professional during his time in our organization.

While he will never be forgotten for his fighting style and transcendent image, Slice will also be remembered for his warm personality and commitment to his family and friends.

Slice’s home gym also posted a tribute picture of the fighter on twitter. THE COPS SHOWED UP AT SLICE’S HOUSE

As a courtesy (yeah right!) the police visited the home of Kimbo but found nothing out of the ordinary so as of now there is no criminal investigation.

THE STREETS ARE TALKING…

Rumor has it that Slice might have suffered a severe heart attack.  We do know that he failed a post-fight drug test after his last bout after he tested positive for an anabolic steroid and elevated testosterone levels.  As of now, there has been no official cause of death identified.

Slice will leave behind hours of Youtube clips of backyard brawls.  He didn’t begin to fight professionally until he was 33 but for those pure Kimbo fans, we will always remember when he dominated Youtube.  He had the original viral videos that featured him just knocking people out in backyard brawls.

Kimbo leaves behind six kids, including Baby Slice who just won his first fight this Year.

We will now start you out on your Binge watching of Kimbo’s fights on Youtube. I have been a fan of Kimbo Slice since he first started making those crazy backyard fight videos. Besides my own father, I thought Kimbo was the baddest, scariest dude on the planet.

At 6’ 2”, weighing around 280 lbs (in his backyard brawl days) and fearless, I thought if he ever got into the MMA he would be rich!

He entered MMA and did fairly well until he got into the UFC. He had a couple of loses but has been fighting somewhat regularly all the way up until this year.

This past February, Slice fought longtime rival DaDa5000 and won by a TKO in the 3rd round.

However, Kimbo failed the pre-fight drug test as they found traces of Nadrolone in his system. So far he has not been formally punished by Bellator but some penalty is expected to be issued in the coming months.

WHAT ABOUT SLICE JR?

Papa Slice is not just a fighter, he’s proven that he’s also a lover. It appears in his hey-day, he wasn’t just knocking dudes out, he was also knocking chicks up. He made Baby Slice!

He made is MMA debut this past weekend at Warrior Nation XFA XII and he left his opponent Tom Brink on the canvas in just 83 seconds.

Kevin Ferguson Jr. wants to make a name for himself. He says, “I don’t really care about the attention because once I’m in the ring it doesn’t matter”.

Besides winning, he might have to tell people to stop calling him “Baby Slice”.

So far, I would say he’s a chip off the old Slice. Wait? Huh? Just watch the video!