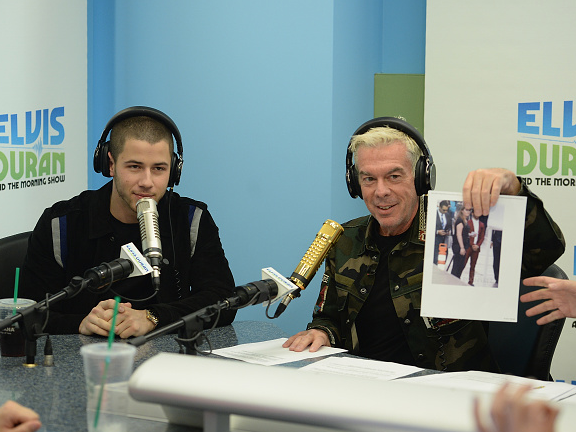 We have featured James Corden’s Carpool Karaoke videos several times on this site. People love them and they always get millions of views on Youtube. Nick Jonas recently participated in the fun with his best friend Demi Lovato. If you missed it, you can click on this link to check out their hilarious video.

But what goes on behind-the-scenes while they are filming something like this? After all, it can’t be that comfortable to be inside a car with all those people.

Especially when you can’t turn on the A.C. inside the vehicle. Jonas sat down for an interview with Elvis Duran and The Morning Show earlier this week, and he was more than happy to share all the sweaty details.

Basically, because they’re recording sound, they can’t have the A.C. on, and at that point in the year, which was like a month and a half ago, it’s really hot in L.A. So for some reason I decided to wear this jacket with another thing on top of it, this whole thing, and I’m just sweating in the car, and Demi keeps looking back at me like, ‘What’s the matter with you?’

So, yeah…it probably smells inside the car. We’re sure he wasn’t the only one sweating. Jonas admitted he was nervous the heat would cause him to forget the lyrics to some of the songs he was singing, but everything worked out in the end.

It is one of the most fun shows I’ve done ever, and James is the best. It’s great to see people you admire, that you like their music or whatever, up there making a fool of themselves and having fun. He says before you start shooting too, ‘Don’t try to sing funny, really go for it! Act like you’re playing the Garden.’ He’s all about it!

Basically, carpool karaoke is like going on a family road trip with your penny-pinching father who refuses to turn on the A.C. to save gas. And to get back at him, the whole family decides to sing catchy pop tunes together, and by the end of the trip the father knows every single song.

And he loves it…