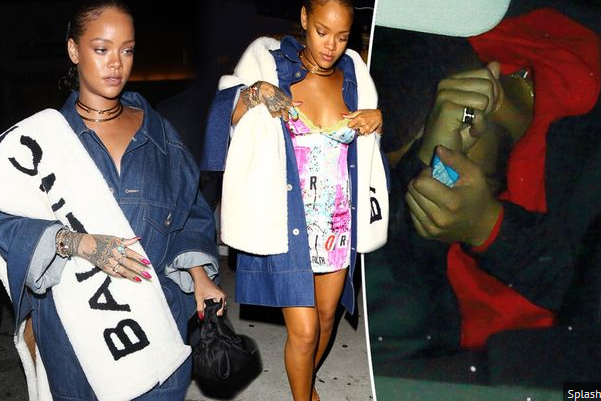 Drake And Rihanna Back On? It’s Possible…They Were Partying With Each Other Until 5 In The Morning! (PHOTOS) If there was a website like Draftkings, where you could bet on potential celebrity couples, I have to imagine Rihanna and Drake would be the most expensive players to draft. They have been teasing each other for years now. They’re not afraid to start relationships with other people, but those relationships never seem to last that long.

And that’s probably because they both know deep down they are meant to be together. This past weekend, the two stars met up at The Nice Guy in Hollywood after Rihanna had dinner at Nobu. They didn’t leave the place until 5am, and for some reason Drake did not want to show his face.

You can see him covering up his face as he waited to leave inside his vehicle. Or maybe he was just dabbing. It’s 2016, dance moves are getting too complicated for me to follow. Surprisingly, there are no comments from those trusty sources on this story. Usually you’d see some quote that says, “Drake put his arm around her. They were really flirty with each other, but he made sure not to cross the line. He was a gentleman.”

But we got nothing this time, so who really knows what this little meeting was about. Maybe they were discussing business? Because that’s what people do on a Saturday night, right?

The Nice Guy seems to be the hot spot for Drake. Earlier this month, he was seen hanging with Hailey Baldwin. They left the building at around 2:30 in the morning and sources claimed they were getting close to each other on the sofa.

We’ll see what happens. I’ve never been the type to truly care about the love life of a celebrity, but for some reason I really want Rihanna and Drake to have babies together.