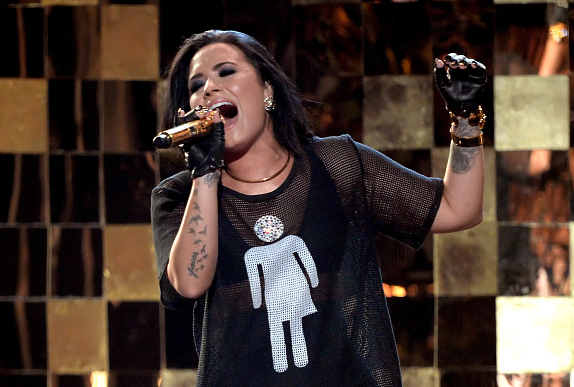 Demi Lovato Quits Social Media, And We Only Know This Because She Announced It To The World On Social Media Demi Lovato has removed herself from Twitter and Instagram, and she didn’t even give her fans a two week notice. She went on her Twitter account last night to announce that she would be quitting both social media apps, which is a little hilarious if you think about it.

It’s like going to your drug dealer’s house to announce you’re getting clean, but then while you’re there you stick around and snort cocaine off the cable guy’s a**.

And we only say this because Demi showed just how addictive social media is during her “I quit” speech. She couldn’t just leave after her first tweet: “Damn I gotta quit sayin s–t. Bye Twitter.”

That wasn’t enough for her. She continued by informing her fans they could still catch her on Snapchat, and then she randomly started talking about the charity she created to help people afford mental health care.

Check out the tweets below… Obviously there is a problem in the world. We do love to focus on negative things; however, it seems a little hypocritical of Demi considering one of the reasons she is leaving Twitter is because she reads too many of the negative comments.

She said, “I like Snapchat cause I don’t have to see what some of y’all say,” and that’s unfortunate because we’re willing to bet she receives more positive messages than negative ones. She chooses to focus on the degrading and hurtful comments.

Why? BECAUSE WE ALL DO! It’s some design flaw in our brain and social media just makes it harder to control because people are more willing to “smack talk” over the internet. We should know, right?

In any event, Demi Lovato has left Twitter and Instagram. At least for now. We’ll see how long she can handle it.