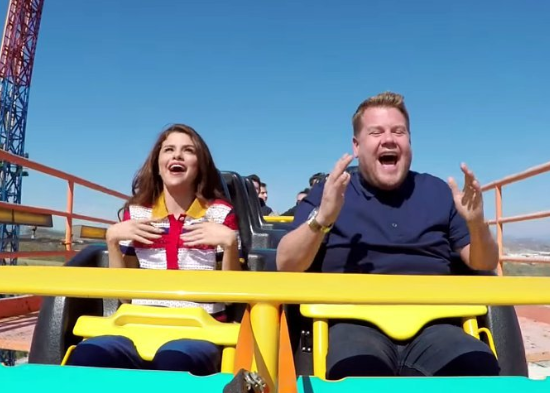 Selena Gomez Joins James Corden For The Most Terrifying ‘Carpool Karaoke’ Ever! (VIDEO) Justin Bieber has joined James Corden on his drive to work at least three times now, so it only makes sense for Selena Gomez to get a ride as well. It took longer than most fans would have liked, but they finally got their wish this week.

The 23-year-old singer made things interesting. They didn’t just sing a few songs while taking a relaxing drive to the studio. Not that there is anything wrong with that formula. It’s been working extremely well for Corden and his crew for several months now.

But still, sometimes it’s nice to speed things up a bit. What are we talking about? Well, the two stars stopped by a Los Angeles theme park to ride a roller coaster, which is apparently something that scares the British right out of Corden.

Gomez didn’t look all that bothered by the ride, but just look at poor Corden’s face. This could be a neat twist to these segments though. Get out of the vehicle and find more creative ways to get to work. Boats, helicopters, horses, large dogs, go-karts, shopping carts, etc.

Anyway, check out the hilarious video below and find out if Selena let James enter T-Swift’s squad.