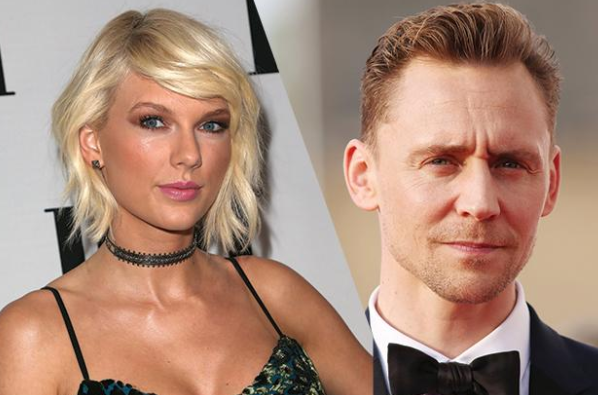 TayTom is actually happening, folks. When those first photos of them walking near the beach were released, I thought maybe there was a small chance this romance was staged. The photos looked very, uh, movie-like? Almost as if they were just characters acting out a scene.

But it looks like this relationship is legit. Taylor Swift invited Tom Hiddleston to a Selena Gomez concert in Nashville on Tuesday night. They were seen hugging, holding hands, and dancing their white bums off. You can move down to the bottom of this page to see a brief clip of the two stars enjoying their time together at the concert.

Before supporting Gomez, the 26-year-old singer took a break from her 35-year-old man to take a solo trip to the Nashville Zoo. Her supermodel friend Lily Aldridge was holding a birthday party for her daughter. They reportedly all fell in love with the giraffes, which makes sense because Taylor is like 75% giraffe. It probably felt like a family reunion for her.

Sources tell E! News that Swift was a little hesitant to start a new relationship right after breaking up with Calvin Harris (real name Adam Wiles) but she had apparently been ready to move on for a long time.

Taylor was hesitant to get involved so quickly after Adam, but she she felt that Adam was not giving her what she wanted for sometime so she was ready to move on towards the tail end of their relationship anyway.  She felt like she was a little school girl with a huge crush. She loves the fact that Tom acts like such a mature man. She loves that he is older. She feels very safe and protected with him. The attraction is very strong.

Could this finally be true love for Swift? COULD TOM BE THE ONE? WILL THERE BE LITTLE TAYTOMS RUNNING AROUND SOON?

We’ll see. They would probably make some cute babies. I mean, they wouldn’t be able to dance, but they would still be cute.

Taylor Swift and Tom Hiddleston being cute af during Hands To Myself at #RevivalTourNashville….And Austin’s alone. pic.twitter.com/WEGBHNZqq6