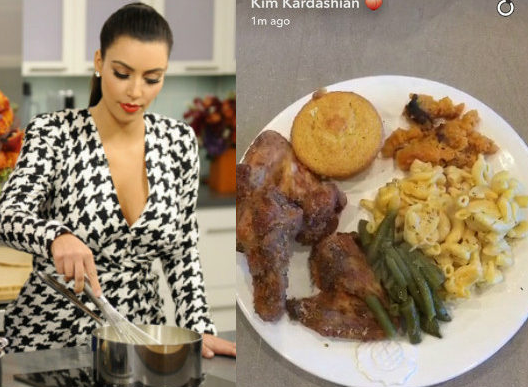 No matter how hard she tries, Kim Kardashian will never impress the people of the internet. Earlier this week, Kanye West went on his Twitter account to brag about the meal his “wifey” made for him on Father’s Day.

“Wifey made the best Father’s Day meal ever. So thankful so happy so blessed. Thank you for making my family,” he wrote.

When we saw that, we figured this was another Khloe Kardashian on Thanksgiving situation, where she tried to take credit for some some Martha Stewart-looking pies. Just like Khloe, we didn’t believe Kim actually worked up a sweat inside the kitchen.

But that all changed when she went on Snapchat to share photos and video of the meal she made. It became obvious that she was responsible for making this plate of food. Either that, or she reheated some leftovers from Golden Corral.

Look at that. You got some chicken, macaroni and cheese, corn bread. She really did try, and we all should be focusing on the sweetness of the meal. Kanye wanted a homemade dinner for Father’s Day and she delivered. That’s super adorable.

But this is the internet. We get all the adorableness we need from cats. The wonderful trolls of the internet destroyed Kim’s meal. They basically made it clear that you can’t make soul food if you don’t have a soul yourself.

Check out some of the best reactions below…