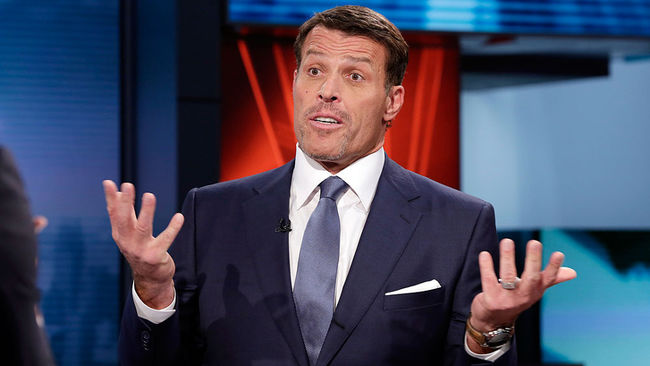 Tony Robbins is a big deal.  Don’t take my word for it, the 6 ft 7 inch motivational speaker is worth $480 million dollars.  The Unleash the Power event, is a three and a half day seminar that has been selling out for years .   A general admission ticket that includes the fire walk is $650;  a VIP ticket is $1095 and a Diamond is $2395.   Like I said, he’s a big deal.

The Dallas event, like many others was also sold out.

WALK ON COALS?  THERE’S A SUCKER BORN EVERY MINUTE!  DUMMIES! THEY DESERVED TO GET BURNED!

I’m sure that’s the immediate reaction and that’s exactly why people do it. You actually have to pay extra for fire walking but nearly everyone does it because it’s part of the experience.  Not fire walking wold be like going to Six Flags without going on a roller coaster, like going to Ruth’s Cris Steakhouse and ordering just vegetables.  You get the picture. On Tony’s website it’s got a great description of the fire walk:

‘Overcome the unconscious fears that are holding you back. Storm across a bed of hot coals. Once you start doing what you thought was impossible, you’ll conquer the other fires of your life with ease.’

Tony has people do this on their first night because once you accomplish this, it releases a strong mental block that holds most of us back and you continue with the rest of the seminar with a free mind.  The fact that many people think it’s impossible and dumb is exactly the point.  I’m sure there are things that you want to do in life, that people insist are both impossible and dumb and you probably don’t do it, thus holding you back from greatness.  That’s the idea at least.

If you think it’s all parlor tricks think again.  It sort of is…but not.  A quick video from Mythbusters shows you how things can quickly go wrong if you are not mentally prepared.

This really is a tale of two stories.  There’s the news and there’s the story from Tony Robbins people and like most things the truth lands somewhere in between which we get from those who were actually burnt.

FACTS: After the fire walking event, Dallas Fire-Rescue paramedics were called in just after 11 PM. They treated 30 to 40 people for burns on their feet and legs and 5 people chose to be hospitalized for their injuries.

Apparently these types of injuries happen all the time at these events, but this really caught the media’s eye because in addition to the five rescue units that were brought into the event a DART bus was also called which triggered media outlets that a code red was going on.  A ambulatory bus getting called to a stadium is big news and everyone wants to read big news.

Paul Gold was one of the 30 people who were treated.  He suffered second-degree burns on both feet.  It was his 2nd time at a Tony Robbins event and second time doing the coal walk.  The first time was a great experience and he didn’t get burned at all.  He said this time he thinks the staff screwed up and halfway through, he knew he was burned.

He believes that staff members this time didn’t allow the coals to cool enough before adding more onto the pile.  He described his injury as if someone had taken a hot iron and pressed it against his feet.  He said he saw a girl crying and some others complaining about their injuries.

One participant, Jacqueline Luxemberg, told the media, that some people were not concentrating on walking across the coals because they were taking selfies and asking others to take video of them.  She said,

“From my observation, there was someone in front of us and someone behind us on their cell phone, taking selfies and taking pictures,[She asked others] to video record for her, so I think that that has a lot to do with it.”

With 7000 people, I could see taking a selfie as a major cause of injury.

Tad Schinke, head trainer for Tony says that the event was a success and this was typical,

I’ve been doing events with Tony for 23 years, and while it may not look like that way, this was a successful event.’

In Dallas tonight, someone not familiar with the fire walk observed the event and called 911 erroneously reporting hundreds of people requiring medical attention for severe burns.

While we are grateful to the quick and robust response from Dallas emergency services, only 5 of 7,000 participants requested any examination beyond what was readily available on site.

We are pleased to have completed another successful fire walk for 7,000 guests and look forward to the remainder of an outstanding weekend with them.

At the end, it a good headline to get clicks and sell more stories and its good news for Robbins because as more people think that its impossible, the more effective the exercise becomes.  So everyone wins…except for those who actually have badly burned tootsies.