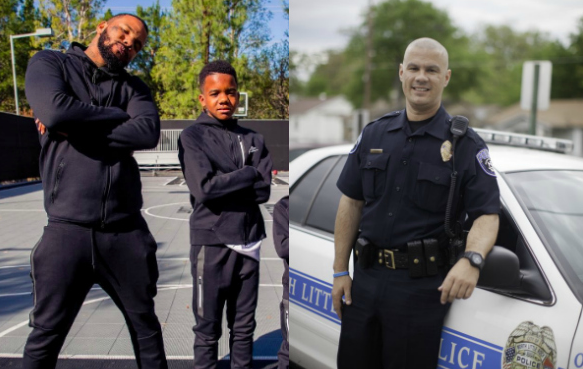 Yesterday was a terrible week for the world. It was depressing, frightening and maddening. You woke up feeling disgusted and went to bed feeling disgusted. But it’s important to remember that while bad things do happen, it doesn’t mean the world is a bad place.

There are good people in this world, and today we’re going to focus on those good people. The Game and his oldest son have put together a GoFundMe page for a police officer in Arkansas named Tommy Norman. The decision to create the page for the officer came after a discussion the rapper had with his son, Harlem, about the difference between good cops and bad cops.

After the powerful conversation, Harlem was motivated to find one of these good cops, so he “did his research” and found Norman’s Instagram page. When he showed it to his father, the 36-year-old rapper was impressed by Norman’s police work, “I was touched by how active he is in the black community where he polices.” Norman is a white officer serving a predominantly black community in Arkansas, and he’s developed a close relationship with the members of the community by simply treating them with the respect they deserve. At the bottom of this page, you will find several examples of his work from videos posted on his Instagram page.

If you can just take two minutes out of the day to go out and make a difference, whether checking on your neighbor if they’re elderly, cutting someone’s grass, or hold the door for someone. It’s really just act of kindness and I think acts of kindness coming from a police officer means that much more to people because that’s not something you’re used to seeing.

That’s something The Game and his son can get behind, which is why they started the GoFundMe page for Norman. The money raised will help the officer better contribute to the community he works in. Simple things like, “purchasing and delivering items such as snacks, drinks, and toys for him to keep his trunk stocked for the kids.”

And for those wondering why The Game just didn’t donate all the money to the officer himself, he explained on his Instagram that he donated the first $1,000 and wanted to empower his son by allowing him to do the rest by himself.

Not only am I proud of my son for taking initiative, I’m thankful that I’ve raised him with such a pure heart regardless of the negativities he’s seen me over come.

Check out some of Norman’s great work below…