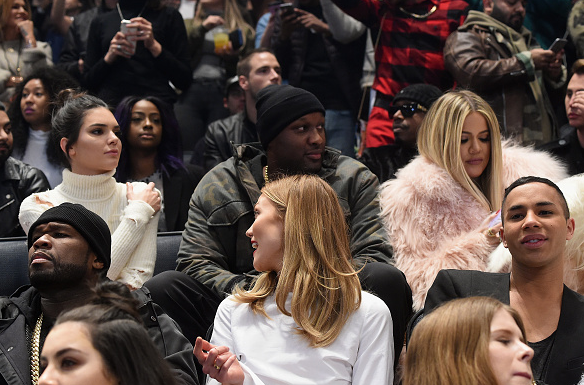 Khloe Kardashian is probably singing, “Don’t save him. He don’t wanna be saved. Don’t save him,” right about now. The 32-year-old reality star has tried her best to save Lamar Odom, but it’s clear he doesn’t want to be saved.

This has been an interesting week for the former NBA star. On Monday, he was traveling from Los Angeles to New York to celebrate his son’s birthday. Before getting on the plane, sources claim Odom drowned himself in alcohol at a bar in Santa Monica. When he arrived at the airport, he was wasted and was removed from the plane before it took off because he was vomiting.

After sobering up, he got on the next flight and made it safely to New York, and that’s where the party continued. He visited the Cityscapes Gentlemen’s Club on Tuesday and had himself a good ol’ time, this according to the owner of the club. Lamar and the club owner @Darxnyght_

The club owner told Us Weekly that Odom showed up with a few friends (both male and female) at around 3:00 a.m. and stayed until last call at 3:45 a.m.

“He was very happy. He was in very high spirits. He was having a good time. He was in that lounge mood, just relaxing. Taking a breather.” the owner claims. He also revealed that Odom did not drink alcohol while he was inside the club. He only had cranberry juice and water. But still, constantly putting yourself in that environment can’t be a good thing.

This all coming after Khloe filed for divorce again on May 26, and reportedly stopped taking care of him after he started using again. A source told reporters, “Khloé had to put her foot down and stop helping him out. She can’t watch him fall apart again.”