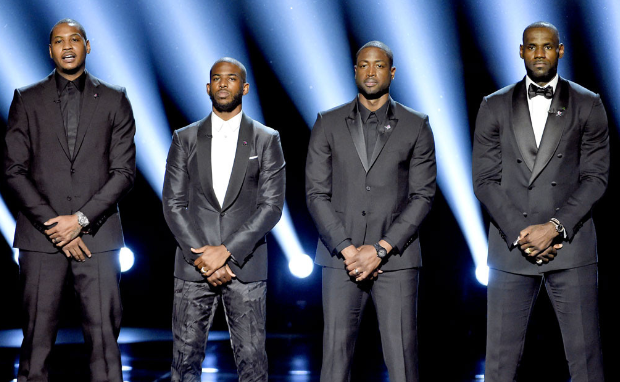 LeBron, Melo, Wade And CP3 Open The ESPYs With A Powerful Speech Taking A Stand Against Violence (VIDEO)

The NBA created another super team, folks. NBA greats LeBron James, Carmelo Anthony, Chris Paul and Dwyane Wade came together Wednesday night during the ESPYs. They opened the show, and unlike most awards shows, no dancing or singing was involved.

Instead, the four stars stood on the darkened stage together and shared a powerful message with the world. One by one, they each took turns speaking about the violence plaguing our country. And they made it clear that they weren’t trying to take sides. They want everyone to stop the shooting and killing. As Wade said in his speech, “Enough is enough.”

Carmelo is the one responsible for making this happen. He promised he would find 3 other NBA players to help with the opening speech, and he did exactly that. As some of you may remember, he was one of the first athletes to react after the tragic shooting in Dallas last week, “We need to be smart about what we are doing. We need to steer our anger in the right direction. Shooting 11 cops and killing 5 WILL NOT work,” he wrote at the time.

Gotta give him credit. You can tell how passionate he is about this. He’s not doing it for the praise, but he definitely deserves some because that opening last night might have saved some lives.

Even Bill Clinton was moved…

Hopefully all four men keep their promise. They have to continue talking about it. You can’t just wait for the next tragedy. You have to care even when it’s not popular. You have to be the one standing up and talking about change while everyone else is trying to catch Pokémon.