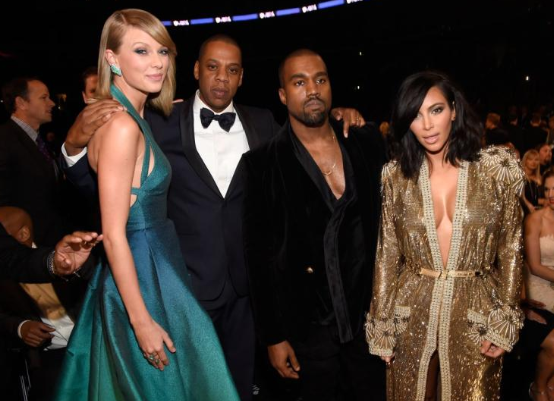 Calvin Harris has started something special, folks. After Taylor Swift tried to do him dirty (after already cheating on him,) he decided to fight back and slam her on Twitter. If you missed his rant, you can click here to read all about it.

When people realized Swift’s team hadn’t murdered him 24 hours after posting the message, they discovered that the 26-year-old singer was vulnerable, and they decided to attack the weak gazelle. Last week, Kim Kardashian promised she had a video showing Kanye West talking to Swift on the phone about his ‘Famous’ song.

Kim decided to release the video this past weekend, and it does make Swift look like a huge liar. You can watch the video below to check out all the snaps Kim posted. In the string of clips, you can clearly hear Swift giving her approval and even saying, “If people ask me about it, I think it would be great for me to be like, ‘Look he called me and told me the line before it came out. Joke’s on you guys, we’re fine.”

Pretty damaging, right? She seemed 100% okay with it, and then when the song was released, she turned her back on Kanye and made him look like the bad guy again.

But of course, T-Swift did have a response to this video being released. She posted a message on Instagram hours after Kim released the video. In the message, she asks, “Where is the video of Kanye telling me he was going to call me ‘that bitch’ in his song?” I guess referring to her as “that bitch” wasn’t mentioned in the original phone call, but still she did tell him to go with “whatever line you think is better,” which seemed to suggest she was down for it all. She sounded super chill with everything in the phone call.

And she claims in her message that you cannot “approve” a song you haven’t heard, BUT THAT’S EXACTLY WHAT SHE DID DURING THE PHONE CALL! Kanye called her to ask her if the line was going to upset her, she assured him (multiple times!) that it wouldn’t!

That sounds like approval to me. Even if she was truly offended by the added “bitch” line, her team still straight up lied to the media.

This was their response after Kanye released the song…

Kanye did not call for approval, but to ask Taylor to release his single ‘Famous’ on her Twitter account. She declined and cautioned him about releasing a song with such a strong misogynistic message. Taylor was never made aware of the actual lyric, ‘I made that bitch famous.’

It’s pretty clear he did call for approval.