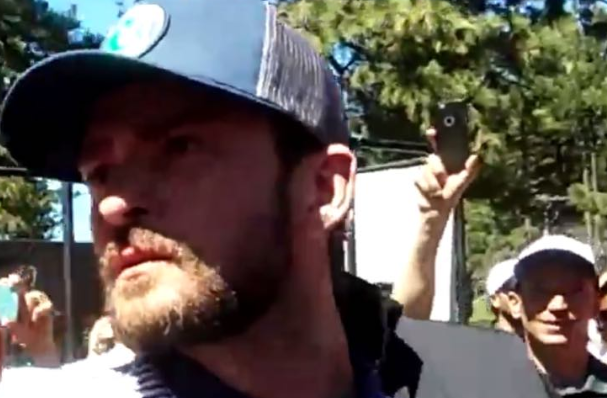 WATCH: Justin Timberlake Gets Smacked (Lovingly Stroked?) In The Face By A Crazy Fan During Golf Tournament! (VIDEO) Justin Timberlake looked like he was about to cry a river full of tears this past weekend during the 27th Annual American Century Championship. The tournament is apparently one of the more popular celebrity golf tournaments, so Timberlake was in the zone.

But some insane fan took him out of that zone as he tried to pass through a crowd of people. The 35-year-old singer was doing his best not to touch any of the disgusting normies as he walked with his team of people. He was almost in the clear when a stranger’s sweaty hand entered the picture and stroked Timberlake’s face.

Most sites are describing this as a “slap,” but as you can clearly see, this was not a slap. It was a gentle touch. A sensual moment between fan and celebrity. Honestly, we’re not sure why Timberlake was so upset. You can see him look at the man and say, “Bro, why would you do that?” It looked like he was ready to beat someone’s a**.

Reps for the tournament described the incident as a minor one, and Timberlake told police he didn’t want to press any charges. But that doesn’t mean this story has a happy ending.

As officers were attempting to escort the man off the course, he started actin’ like a fool again. He was reportedly intoxicated and belligerent. Cops arrested him and charged him with disorderly conduct.

But hey, it wasn’t all bad. Timberlake did have a lot of fun during the event. Earlier in the weekend, he joined Alfonso Ribeiro and Steph Curry for a little dance break.