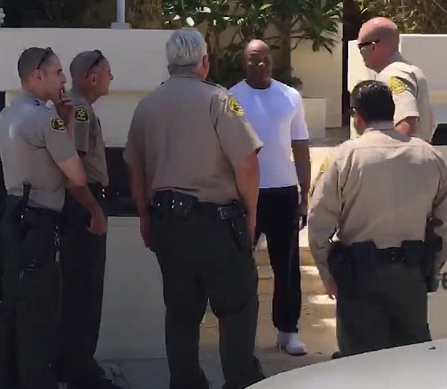 Wow…Dr. Dre Was Handcuffed And Frisked At His Home In California After Some Racist Bro Claimed He Pulled A Gun On Him

Don’t feel alone, even Dr. Dre is still putting up with racism and police harassment. The legendary rapper/entrepreneur was involved in a strange incident outside his home in Malibu on Monday morning. According to the report, some bro was blocking Dr. Dre’s driveway.

Dre calmly asked the dude to move, and he did, but while he was moving he yelled and said a few choice words. That’s when Dre pulled out his cellphone to record the douchebag. When the man looked up, he thought the phone was a gun and said, “Here we go again, another black guy with a gun.”

So he did what any respectful racist bro would do, he called the police and told them someone pulled a gun on him. Officers showed up at Dre’s home a short time later and immediately put him in handcuffs due to the nature of the call. They even tossed his a** in the back of a patrol car while they searched the area and talked with witnesses.

Police say Dre was polite and consented to a search. Not surprisingly, police did not find a weapon at the scene and Dre was not arrested. But the racist bro insisted on making a citizen’s arrest, which means he was able to file a report explaining his side of the story. Because of this, the Sheriff’s Department must send the report to the District Attorney, and they will decide if there is enough evidence for a case.

Hopefully this will backfire on him and he’ll get called out for making false reports to police. If you’re going to call 911 and claim someone has a gun (especially at a time like this) you better be 100% sure it’s a gun. This situation could have had a nasty ending.