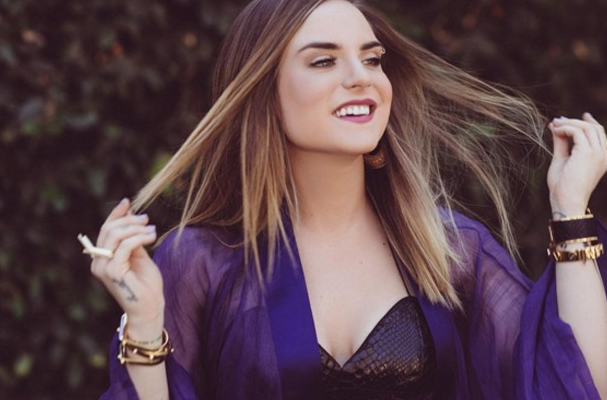 In a new interview with Popsugar, 25-year-old singer JoJo admitted she went to extremes to lose weight, in hopes it would help her career in the music industry. It’s a story we have heard several times in the past, and a story we will unfortunately hear again in the future.

When JoJo was 17 or 18, she was still learning the business. When she was in her early teens, she was a bit protected because her mother was managing her career. But that all changed when she turned 18. She signed with new management and was prepared to top the charts with a poppin’ album.

So when her new company told her she needed to lose a lot of weight in a short amount of time, she agreed to go on a pretty extreme diet…

I was under a lot of pressure with a company I was at previously and they wanted me to lose weight fast. So they got me with a nutritionist and had me … on all these supplements, and I was injecting myself — this is a common thing ‘the girls’ do by the way — it makes your body only need certain calories, so I ate 500 calories a day. It was the most unhealthy thing I’ve ever done.

The article doesn’t mention how long she stayed on the diet, but she revealed that she easily gained all the weight back because she felt terrible about herself, “I was upset that I even subscribed to the standard they wanted me to be at,” she admitted. JoJo at Teen Choice Awards In 2009

But she shouldn’t feel bad. As she mentioned in the interview, she did it because she felt like it was the only way her album would be released. That’s what Hollywood does. They trick you into believing if you don’t fit a certain image, then you won’t be successful. It’s obviously bullsh-t. Talent is more important than any number you will find on the scale.

The good news is that JoJo has learned from the experience. She is still working on new music. Last year, she released three new songs. You can check out one of them in the video below. Her third album will be released Oct. 14, and hopefully it’s a huge success.