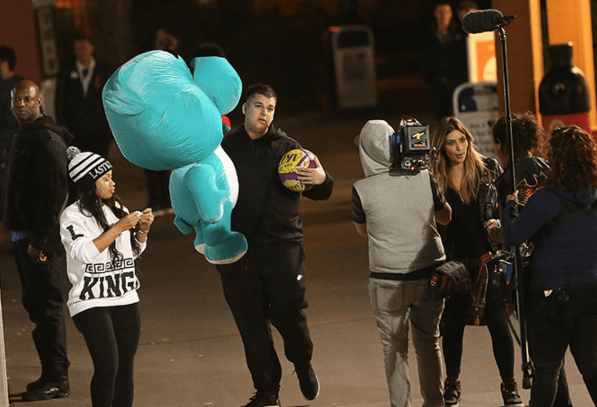 Is The Swirl Melting? Rob Kardashian Is Concerned His New Reality Show Is Destroying His Relationship With Blac Chyna Rob Kardashian saw that $$$ being dangled in front of his face and reluctantly agreed to let cameras follow him and Blac Chyna around as they end the honeymoon phase of their relationship and prepare for parenthood.

Filming for the show has been going on for two months now, and for the last month, Rob has reportedly been skipping filming and avoiding events. He believes the cameras are responsible for the majority of the fights between him and Blac.

Most recently, the 29-year-old reality star skipped out on a huge Kardashian family event in San Diego for his Grandmother’s birthday. Blac had to attend the event by herself, and that’s not cool with producers of the show because it doesn’t make for good television. No one wants to watch an hour of Rob trying on different baseball caps in front of his bathroom mirror while Blac and Kendall talk about which brand of almond milk tastes the best.

This disdain for reality television is not a new thing for Rob. It’s the reason he quit filming Keeping Up with the Kardashians. He believed it was destroying his family, and after he stopped filming, he was pretty much forced to spend his days inside his bedroom. He couldn’t really attend any family events because the cameras were always going to be there.

Producers of this new show are worried they won’t have enough material to keep things going for a full season. It sounds like this has been a poor business decision for all parties, except maybe Kris Jenner because she doesn’t experience emotions like the rest of us. I’m like 99% sure her kids must write her a check before they’re allowed to hug her.

Rob needs to step up. A healthy relationship won’t be destroyed by the cameras. I mean, sh-t…he thinks having a few cameras following him around is hard? Just want ’til the baby, bro. No one murders an unstable relationship like a baby.