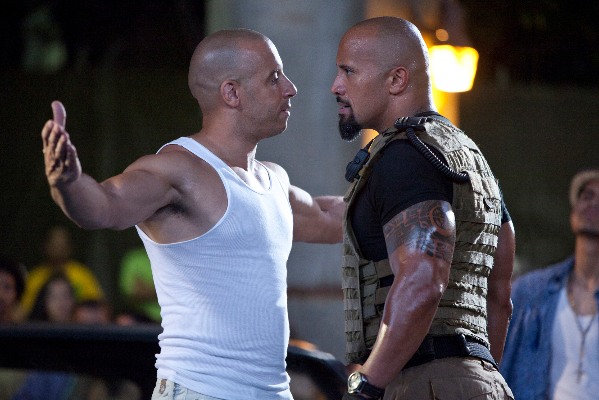 It’s not “all love” on the set of Fast 8. Vin Diesel loves to brag about how close everyone on the cast is. He loves to act as if they are one big happy family, but Dwayne ‘The Rock’ Johnson is keeping it real. He doesn’t have time to put up with a bunch of candy ass jabronis, and unfortunately for him he’s surrounded by them on the set.

The 44-year-old actor/wrestler went on his Facebook account to rant about his Fast 8 male co-stars. He mentioned how thankful he is to be working on the final week of shooting.

There’s no other franchise that gets my blood boiling more than this one. An incredibly hard working crew. Universal Studios Entertainment has been great partners as well. My female co-stars are always amazing and I love ‘em.

And that’s where the politeness came to an end. What he wrote next sounded like a script from the WWE. He was basically challenging some of his male co-stars to a brawl out in the parking lot.

My male co-workers however are a different story. Some conduct themselves as stand up men and true professionals, while others don’t. The ones that don’t are too chicken s–t to do anything about it anyway. Candy asses. When you watch this movie next April and it seems like I’m not acting in some of these scenes and my blood is legit boiling—you’re right.

Oh snap, right? You know things are serious when The Rock brings back the chicken sh-t/candy ass insult combo. He’s one bad day away from giving some poor assistant The People’s Elbow.  Here is the post. He didn’t call out anyone by name, which perhaps makes him a little piece of chicken sh-t too. Or the more likely scenario is that he’s trying to create drama to get people excited about a movie no one asked for. Get people talking.

HE MUST  HAVE BEEN TALKING ABOUT  TYRESE RIGHT?  WRONG!

Tyrese responded, saying that he was not happy that The Rock aired it out on social media,but confirmed that he and The Rock had a great relationship.   Tyrese wrote this in a since deleted post: Why are you guys so impressionable? A man wouldn’t be singing from his heart and soul to another mans little angel if he had a problem with her dad

Does any of us know why bro decided to jump out there with his post? No…… Would one assume that IF he’s going to jump out there and generalize and say ‘Male Co-Stars’ he would be more clear and call out names??? Of course he should of,”

Let me calm you guys all the way down…….. I don’t know WHO he has a problem [with] and…(Read More)