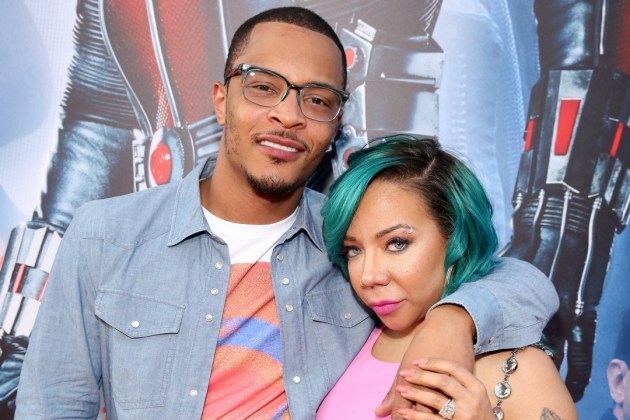 A Fed Up TINY Releases an Official Statement Regarding Rumors of Her and TI Getting a Divorce. It’s Up To You If You Believe it!

…….she’s going to be a single mom, she’s getting a divorce, she has a new residence and everything in between. On behalf of Mrs. Harris this is the truth — Tameka & T.I. are good. They love each other and they have a beautiful family with 7 amazing children. For them it will always be family over everything.”

Now let me interpret that statement. The couple have a show on VH1 called  T.I. & Tiny: The Family Hustle.  They have been together since 2001 and married since 2010.  I’m fairly certain when you have a show called the “Family” Hustle, part of the contractual agreement is that you stay a family!

From this we can deduce two things, either:

Tiny, who has been criticized repeatedly for her looks and TI who most woman consider “man candy” and worth $55 million, both decide to have an “open marriage”, agreement.  Tiny gives him a pass.  She’s in love and most likely can’t do any better, he’s a dog but he loves her too.  She tries to fix her public reputation but let’s him continue his behavior on-the -low.  She just asks that he covers his tracks a little better.  If not for her sake, for the sake of the kids.

They both decide to stay together for now, cash a few more VH1 checks and then split when it’s all said and done.  Tiny actually does have the house she purchased so a break up might be in the works but for now they want those checks.  Then if they do get divorced, that could be a whole new show.