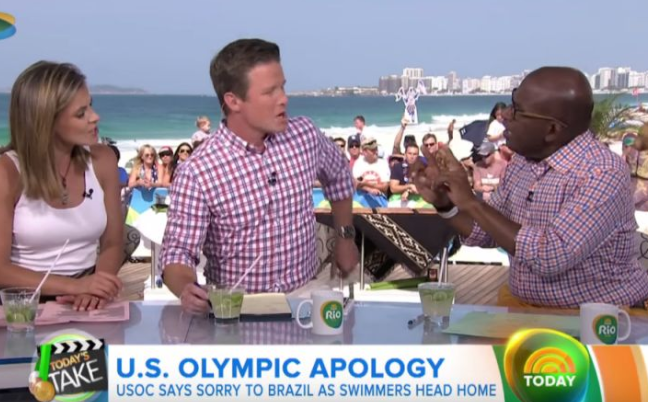 Hilarious: Al Roker Calls Billy Bush Out For Trying To Defend Ryan Lochte, And It Was Freaking Beautiful (VIDEO) By now, you should all know about the Ryan Lochte drama coming out of Brazil. If you somehow missed it, you can click on this link to get all the details. Basically, Lochte told Billy Bush during an impromptu interview on the beach that he and his swimming buddies were robbed at gunpoint. He even said that a gun was pressed against his forehead.

A few days later, it was discovered that his story was completely false. A gun was never pressed against his head, and no one ordered the swimmers to exit their vehicle and get down on the ground.

And just to be clear here, Lochte wasn’t exactly an outstanding citizen before this incident. He’s a great swimmer, but he’s not a great person, so it’s not like this was a silly, one-time mistake from a wonderful dude. There is no reason anyone should be defending him.

Haha! Roker was about to slap the sh-t out of Bush. I don’t blame him. Bush was trying his best to put a positive spin on things…using words like “embellished,” and “untruth.”

What da hell do you think an untruth is?

And what’s NBC’s infatuation with super white dudes who have no talent? Billy Bush? Carson Daly? You could replace both of them with a stack of pancakes and no one would notice.

Anyway, Lochte did give his first sit-down interview on Saturday. He managed to fake a few tears while talking with Matt Lauer. He claims he was still intoxicated when he gave Bush that exclusive interview, but he’s not using that as an excuse!

…even though he mentioned it like 50 times. Check out the interview below.