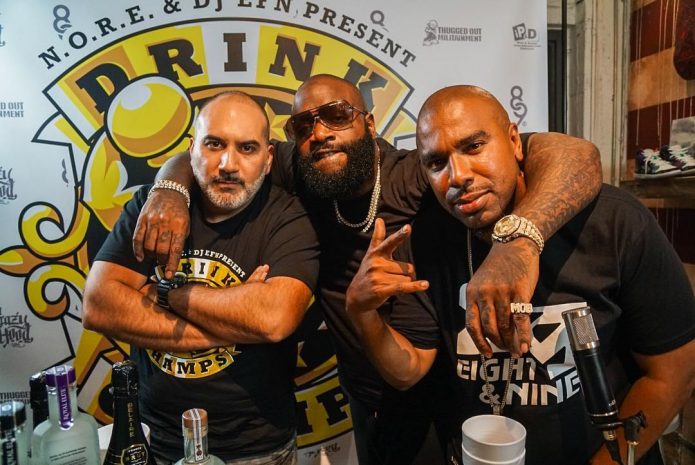 I like this because Ross is a heavy weight in more ways than one. He is capable of putting out good music and a diss track from Ross has the possibility of having great entertainment value.

As most of you know, Drake basically reignited the beef between himself and Meek Mills. He literally called him a “pussy” in DC and said that Meek brought this on himself in Philly. (It’s funny how he continues to go at Meek but not Budden). By all accounts, this equates as reheating the beef.

If you are not a regular listener to Nore and DJ’s Efin’s podcast than you are missing out on some real hip hop. It’s just everything that a Podcast should be about. Besides getting down to the real essence of hip hop, the other goal of Drink Champs is to get the guests so drunk that they feel comfortable saying what they really mean!

Although it’s not clear how drunk or how far into the podcast it is when NORE asked Ross about the Meek / Drake feud but Ross was very clear with his answers. He basically said that if Drake doesn’t leave Meek alone, Ross will have to step into the ring; or to quote the man himself,

“If it’s gotta go there, Renzel gonna jump off the porch on your ass,”

Here is the snippet of Ross going in…

A Shocking Video Surfaces of N.O.R.E.’s Podcast Interview with DMX And Has Fans Heartbroken as DMX Deteriorates Right Before Our Eyes! (VIDEO) That’s a big freakin’ deal. That’s why this is so heartbreaking. The last time we saw DMX he was found lifeless in a hotel parking lot. Some thought drugs, some thought asthma. That was never really cleared up.

He surfaced again in the news this weekend after a woman accused him of sexual assault after he accused her of stealing his 30K watch, which she happened to have when the police picked her up.

The story is a simple yet familiar one. “X” met a girl in a bar in Hollywood on Friday, took her and a bunch of people back to his hotel to party. Members of DMX’s crew noticed that the 25 year old Hawthorne woman had disappeared. Then they noticed that DMX’s 30k watch had also disappeared so they called the police.

When the police found the girl they also found the watch. They cuffed her and as they escorted her to the squad car she blurted out that DMX had sexually assaulted her.

Now police are looking into her allegations but everyone at the party says that there were just too many people around and that X never hooked up with her there. The entire story is not really even news if you ask me.

Oh yeah, that. As you may or may not know, N.O.R.E. has this podcast called “Drink Champs”, that has been gaining a lot of popularity in the hip hop community. Not only because the caliber of guests he’s able to get, but more so the stories that these hip hop legends are now willing to reveal.

There has never been a platform like this. During DMX’s interview he reveals how Puff didn’t want to sign him to Bad Boy records originally because he didn’t think he was marketable. He says that Puff then changed his mind and offered him a deal and a bonus that he then turned down.

Warning: It’s going to appear that DMX’s voice is sped up, but if you listen, N.O.R.E.’s voice sounds perfectly normal. This is just how DMX sounds.

Also, watch his mannerisms and hand movements. I know a crack addict when I see one. I’m not saying that he is, I will let you make that judgment for yourself.