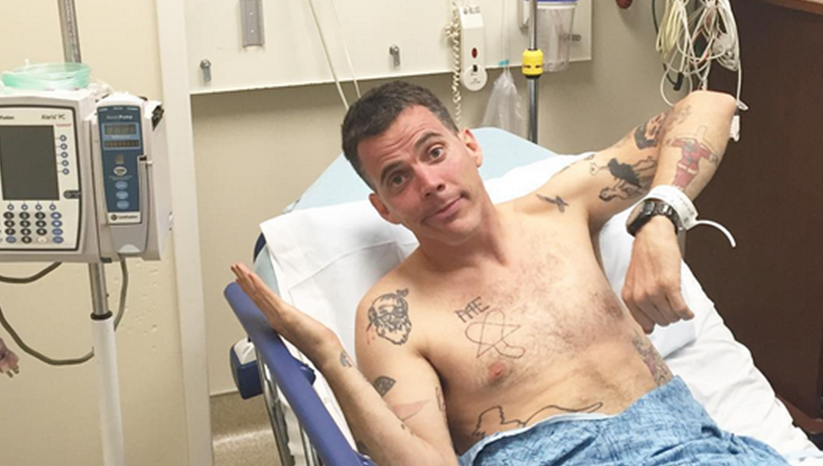 Too Old For This? WATCH: Steve O’s Latest Stunt Filmed By Tony Hawk, Goes All Wrong and Lands Him In the ER. (Video)

Although the fall doesn’t look that bad,  Steve-O ended up breaking his right ankle in three places , he broke his left heel and sprained his wrist.  All in a day’s work.

If you are like me, thinking that all the injuries are worth it.  He’s rich!  Think again.  Steve is more stuntman then business man.  He is only worth 2.5 million dollars.  Yes, he’s probably pissed away millions on alcohol and drugs.

As we try to give you more bang for your buck.  If you are wondering what his most viewed video is, it’s the Jellyfish Sombrero.

As a city slicker, I truthfully had no idea about jelly-fish or jelly fish stings, but thanks to LMGTFY, I got all the answers I needed.

Each jellyfish tentacle is covered with thousands of cells called cnidoblasts, which house nematocysts containing stinging threads. When a jellyfish encounters another object, pressure inside the nematocyst causes the threads to uncoil. The stinging cells spring out at the unwitting victim like tiny darts, firing venom into it.

The venom is a neurotoxin designed to paralyze jellyfish prey. Although a jellyfish can kill a small aquatic animal, its sting is not usually fatal to humans. It tends to cause pain, skin rashes, fever and muscle cramps. The degree of pain and reaction to a jellyfish sting can depend on the species — larger jellyfish have larger cnidoblasts that can penetrate deeper into the skin, and some jellyfish have stronger venom than others

Now, I am prepared to appreciate the video….AND this man is crazy.

While drugs and alcohol gives you fragile bones at age 42, Tony Hawk lands a 900 at age 48. This is not only inspiring, it’s freakin incredible.  BTW – Tony Hawk is worth $120 Million.  OUCH!!