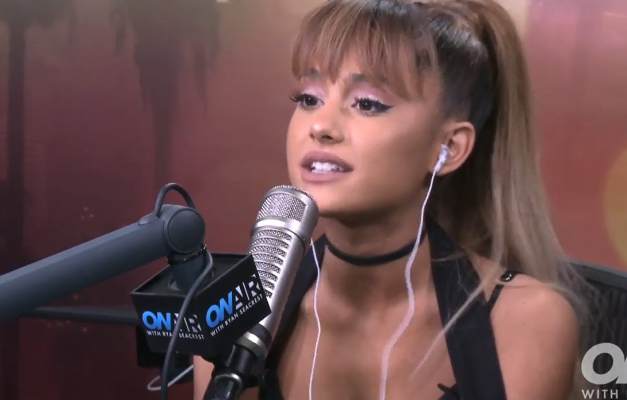 Oh Snaaap! Ariana Grande GOES OFF On Ryan Seacrest After He Asks About Her Relationship With Mac Miller! (VIDEO) If you’re planning on interviewing Ariana Grande anytime soon, you might want to avoid any questions about her dating life. The 23-year-old singer was having a great interview with Ryan Seacrest earlier this week. She was sharing neat stories about her obsession with Madonna, they were laughing together…it was all good.

But then Seacrest mentioned a photo Grande shared on her Instagram last week, which seemed to confirm her relationship with Mac Miller. As you can see in the photo below, Grande is getting hugged by Miller on the ground, and the caption was simply, “baabyyy” It certainly looks like a photo a girlfriend and boyfriend might take together, right? This is probably why Seacrest assumed it was safe to ask about the photo and their relationship during the interview.

But apparently, Grande isn’t ready to talk about it. When Seacrest brought the photo up, Grande shot back with, “Oh, is that what I did? Is that what Instagram means to you now? All right world, let’s go. What was that segue?”

“Well, I don’t know. I’m asking,” Seacrest replied, obviously a little shocked by her response. “What are you asking? You said a sentence, there was no question. … I don’t know, man.” she fired back.

Watch the awkward exchange below…

Her reaction is a little strange. It seems pretty clear that there is a relationship going on, and when you post a photo like that with a caption that says “baby,” what the hell are people supposed to think?

If you’re not ready to talk about it, don’t blast the relationship on Instagram. Keep it private if you want it to be private. You can’t play both sides.