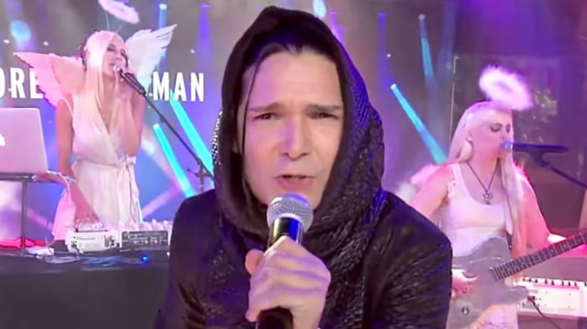 If you were on the internet this past weekend, there is a decent chance you saw one of the strangest musical performances ever. And that’s not hyperbole. The video you see above is painful to watch. Corey Feldman, who was apparently inspired by Michael Jackson, has started a musical journey.

He and his Corey’s Angels bandmates somehow convinced the producers of the Today show to let them perform last week. The child star from the 1980s performed his first single titled Go 4 It, and it was clear that he should not have went 4 it.

The song was terrible, but Feldman’s dance moves were the real disaster. It was like he had ants crawling over his entire body, and he was trying to shake them off before the song ended.

Obviously, once this video hit the internet…it went viral. Millions of people were making fun of the 45-year-old actor because that is what the internet does. Once Feldman saw the negative reaction, he couldn’t believe it. He wasn’t able to get out of bed. In a since-deleted Facebook live video, Feldman and one of his bandmates admitted they haven’t been able to leave the house.

We put ourselves out there and we did the best that we could. And, like, I’ve never had such mean things said about me — like, constantly. All we can say is that we tried really hard because we love our fans and we just wanted to give them the best show that we could. It was a song, OK? It wasn’t that weird. I’m sorry if that’s not good enough for you

I don’t usually defend the internet, but I will say there were a lot of comments of support as well. There were definitely some mean comments; however, there were also several, “Wow. I feel bad for him.” comments.

Look, Feldman. You tried, and that’s more than most people can say. And you’re in a position where you can continue to improve. It’s not like you’re a struggling single father of three who quit his high paying IT job to chase his dreams of being a rock star.

Keep doing you, man. Just don’t be surprised when the internet makes fun of you for it.