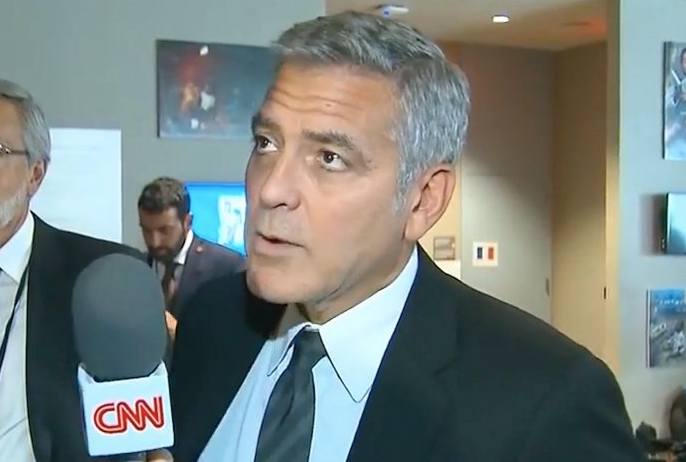 George Clooney has been friends with Brad Pitt for several years. They may not be as close as Jimmy Fallon and Justin Timberlake, but that friendship is hard to beat.

The point is, Clooney and Pitt are close enough to where you would think if one of them got a divorce, the other one would know about it before the gossip blogs. However, that obviously wasn’t the case with Pitt’s recent divorce.

Clooney was at the United Nations when he was stopped by a CNN reporter, “Alright, don’t shoot me on this last question but you’re friends with both of them. Any thoughts?” The reporter asked the 55-year-old actor.

And it was clear he had no idea what the reporter was referring to, “What’s that? What’s happened?” he asked the reporter, with a bit of concern in his voice. That’s when the reporter mentioned the divorce between Pitt and Angelina Jolie.

Of course, it seems a little silly to ask Clooney a question about a Hollywood divorce moments after he left a roundtable with President Barack Obama to discuss the refugee crisis.

But that’s just the world we live in. By the way, there are two different rumors floating around on the reasoning behind the surprising divorce. The first one being that Pitt has anger and alcohol problems, which we reported yesterday.

The second rumor is less concerning. Some sources say their personal and business projects were just taking them away from each other and it was getting harder and harder to maintain a marriage.

It has been a very difficult time. It’s been a very hard decision to make, but ultimately they both did the best they could to make the relationship work. Both sides are hurting very deeply right now.

Seems unlikely though. They’ve been together since 2004. If their relationship was so fragile, it would have ended a long time ago.