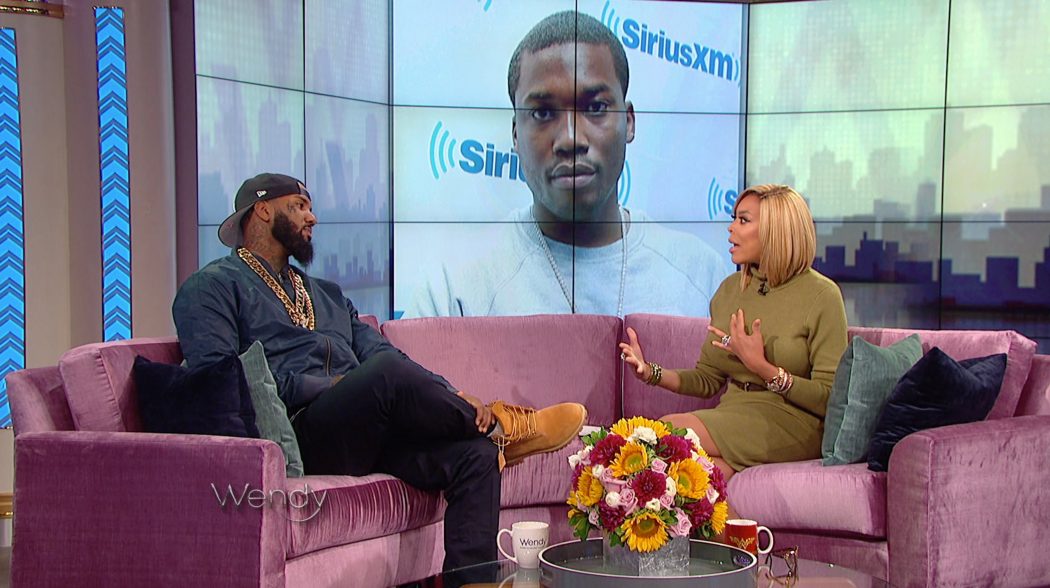 Wendy Williams is Back. She Grills the Game on Meek Mill Beef and Gets Him to Admit Which Three Kardashians he Slept with. Kourtney is not one of them! (Watch Hilarious Full Interview). Wendy Williams is back for her 8th season and she hasn’t missed a beat.  Wendy is polarizing but I am a long time Wendy fan because of interviews like this.  Quite frankly, I have not been able to find anyone who goes as hard as Wendy does with the exception of Howard Stern.

People will call her a man, they will call her “Wendell” but she is good at what she does.  All those jokes are old and she’s heard them all. In fact one would say she is born to do what she does and for that reason she does it well.  While everyone is joking, Wendy is cashing checks!

While there is a lot of gossip surrounding the queen herself (her marriage, the firing of her producer) she managed for a 2nd day in a row to push all of the questions on her guests.

THE GAME – MEEK MILL AND SMASHIN UP THE KARDASHIANS!

The Game was on the show to promote his new album, which makes the timing of the beef with Meek Mill a little suspicious.  As he goes on his promotional tour, now suddenly he has something to talk about.  It’s actually a pretty smart move on his part.  Nobody cares about his album they want to know about the beef with Sean Kingston and Meek Mill and they want to know which Kardashians he really slept with.  Wendy being the expert that she is, knows what we care about and drills deep, getting right to the point.

The Game also gets credit. He basically managed to kiss and tell, offend everybody and do it with a smile.   At the end of the segment he says,

“In all chillness, it’s all love. Sometimes things happen and they’re uncontrollable, but I’m a good guy and those are good people.”

As if that’s going to make it all better.  That’s like someone sending you a f’d up text and putting a smiley face at the end as if that makes being a d*k suddenly ok.

Here is the video – I must say, the ladies do love The Game. Wendy Williams is a lot of things to a lot of people but we love her most of all because she’s entertaining. Fans of hers who watch her show regularly during the day, might not get to see her when she is doing her rounds on Late Night Television as a guest, so you could have easily missed this.

It’s weird to see the interviewer now being the interviewee, but she is a fabulous guest because she keeps it interesting…sort of. In this instance she kept it creepy. Conan’s face tells the entire story. When asked about her parenting style, she explains that she has an “Open Door Policy” in her house. She says that privacy is kept by making your presence known as you are approaching,

We walk hard in our house, and that way … oh, we’re always clearing our throats, that’s the warning sign that ‘here I come’, you don’t just tip toe to someone’s room. I respect him …”

And if they don’t make themselves known, then they are in for a surprise. That’s exactly what happened to her son Lil Kevin.

Watch the clip, Wendy can tell the story better than I can write it.

Now either Wendy is lying or she is crazy. I’m voting for crazy. Lil Kevin will never be the same again, and he will definitely be never kissing his mom on the mouth. If Lil Kevin grows up to be a homicidal killer, I’m pretty sure the jury will be reviewing this clip as evidence that he was traumatized as a youth. In fact, after hearing that story, I might need to talk to my own therapist.