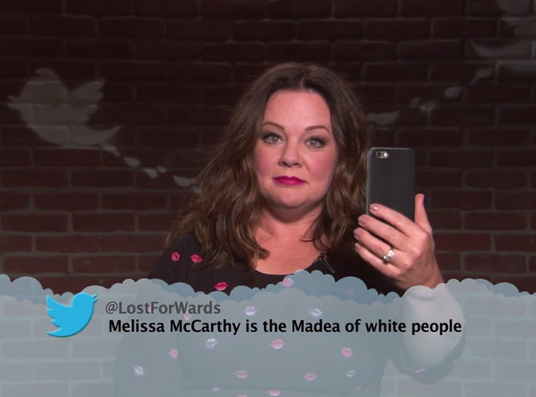 ‘Mean Tweets’ Are Back, And This Time Someone Actually Had Something Mean To Say About Ryan Gosling! (VIDEO) It’s been a depressing minute since Jimmy Kimmel has released a standard edition of Mean Tweets. We were getting a little worried that they may have put an end to the hilarious segment, but thankfully that’s not the case.

Jimmy Kimmel delighted us all on Wednesday with the 10th installment of Mean Tweets. And the interesting thing about this installment is that it actually featured some pretty likable celebrities. You had Bryan Cranston, Norman Reedus, Paul Rudd, Melissa McCarthy, Chris Evans, and even Ryan Gosling.

That’s right, folks. A Twitter user had an insult for Ryan Gosling, and we’re not going to spoil the joke for you, but we will say it was an accurate observation.

Zac Efron was also thrown into the fire: “Has Zac Efron ever been in a film where he didn’t play a total douche? I’ve never seen one of his films, I’m just judging by his face.”

There are some great jokes in this installment. One person even compared Anthony Mackie to an aardvark.

Check out the hilariousness in the video below. Which celeb left with the most severe burns? I really enjoyed the Paul Rudd tweet.