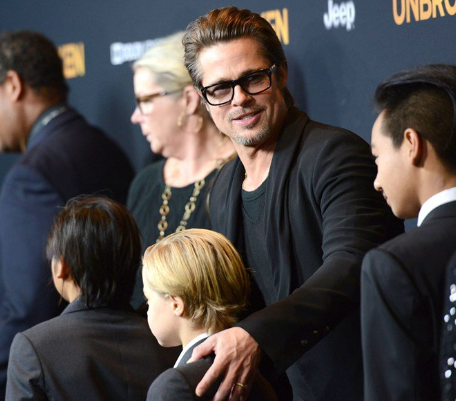 Brad Pitt Abuse Details: Reports Claim The Actor Got In A Heated (Possibly Physical) Argument With His 15-Year-Old Son As expected, we are learning more information about the alleged abuse that happened on a private plane on a trip back home from France. We reported earlier this week that Brad Pitt was allegedly drunk on the plane and yelling at his children. At some point, sources claim he got physical with the kids and that’s when Angelina Jolie decided she had enough.

Now we are getting more details and things aren’t looking good for the actor. According to the reports, Pitt had never physically abused his children. He’s yelled at them, berated them while he was drunk, but he’s never put his hands on them.

That changed on the plane last week, though. Shortly after the plane took off, Brad and Angelina started arguing. It was an intense argument, and their 15-year-old son Maddox felt like he should step in and defend his mother.

When he did, Pitt allegedly lunged at him. The reports don’t specify if it was a punch, push, slap, etc. However, they do claim he made contact.

Another thing investigators are trying to figure out is, “Was Pitt drunk at the time?” There is still some confusion there. Some sources claim he was drunk when the incident occurred, and other sources say he didn’t get drunk until later in the flight.

One thing is clear, this alleged assault is the main reason behind the divorce. Insiders say Angelina would have never left Pitt if it was just a substance abuse problem. This is all about protecting her children, which is why she’s asking for sole physical custody.

Brad doesn’t plan to give up. His team continues to claim he never “acted aggressively” toward his kids. We’ll continue to keep you posted as more information oozes out.

Hopefully the stories don’t get even worse.