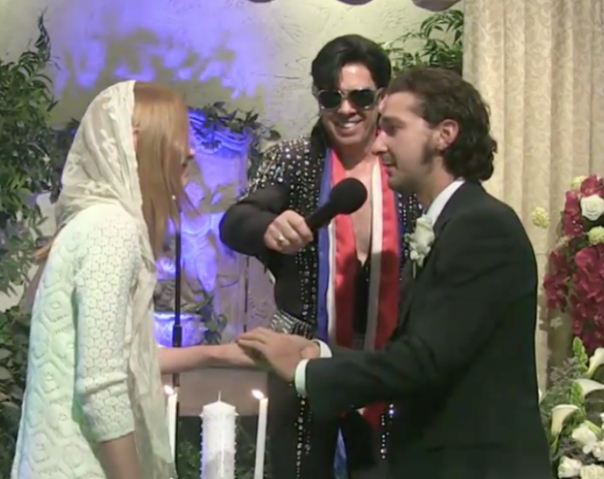 Most celebrities opt for lavish weddings that take a year to plan. They want it all. The flowers, the perfect cake, the famous guests, etc. But we all know Shia LaBeouf is not your typical celebrity. Heck, he’s not even your typical human.

So it shouldn’t surprise you to learn Shia and his longtime girlfriend, Mia Goth, decided to get married at the Viva Las Vegas chapel. The chapel is known for their ridiculous themed weddings. They offer Elvis and Alice Cooper themed weddings, and also more basic packages like a gangster or gladiator wedding.

Shia and Goth went with an interesting blend of the Elvis theme and the Hawaiian theme. In the video, Shia appears to be crying during the ceremony, which seems to add to the legitimacy of the wedding. Some people were wondering if this was another ~performance art~ event, but it looks like this ceremony was legit.

The two stars first started dating back in 2012 after they met on the set of Nymphomaniac. Engagement rumors started following the couple around in 2015 when Goth was spotted wearing a ring on that special finger.

They have certainly had their ups and downs. Some of you may remember the huge fight they had back in July of 2015. Entertainment Tonight was able to get video of the argument, and the 30-year-old actor was heard saying:

“I don’t wanna be aggressive. This is the kind of s–t that makes a person abusive. If I’d have stayed there, I would have killed her.”

Well, good luck to them! Hopefully they have worked out all their problems. I mean, most married couples want to murder each other, right? So they will probably fit right in.