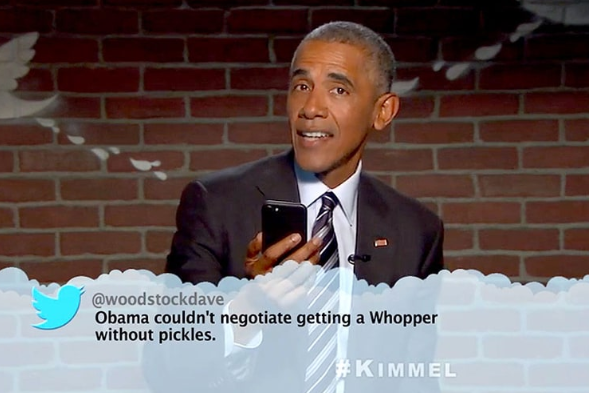 Sadly, Barack Obama’s time as president is coming to an end. You might not agree with everything he’s done during his eight years, but you have to admit he’s one of the coolest presidents we’ve ever had. His whole family is legit, and it’s going to be difficult adjusting to a life with Clinton or Trump in the White House.

On Monday, Obama went on Jimmy Kimmel Live! to participate in another round of Mean Tweets. He read off several insults from angry Twitter users, and a few of them were pretty hilarious.

But the best diss came at the end of the video when Obama read a mean tweet from Donald Trump. In the tweet, Trump wrote, “President Obama will go down as perhaps the worst president in the history of the United States!”

Obama’s response to that tweet was perfect. As always, we’re not going to spoil it for you. The video is just under two minutes long, so it’s not like you don’t have time to watch it.

The president also talked with Kimmel during the show, and he was asked if he would consider running for a third time if it was legal.

“If I were able to run for a third term, Michelle would divorce me. So it’s useful that I don’t have that choice to make. All the women in my life are looking forward to being able to live a more normal life.”

They all deserve a break. It’s been real. By the way, here is the first edition of Obama Mean Tweets.