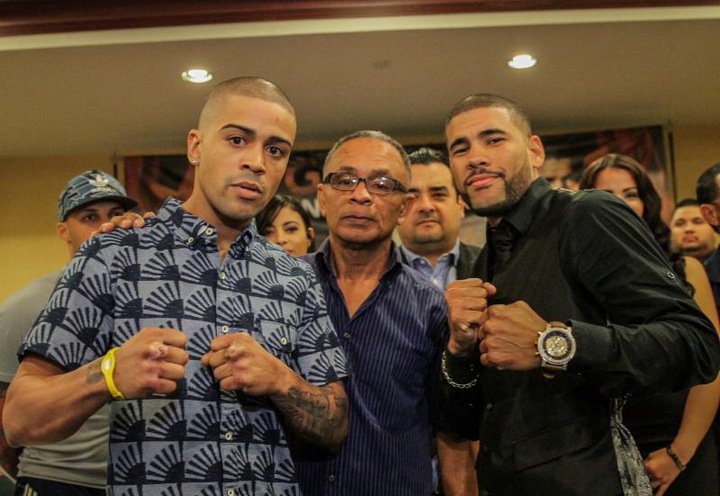 TWO MATCHES IN ONE: Juan Manuel Lopez TKO’S Wilfredo Vasquez Jr. Then Charges his Trainer; But The Trainer Put Those Mittens On Him! (Watch KO & After Brawl)

This was one of those boxing matches that was a real fight.  These two wanted to harm each other in a bad way.  Fight fans knew that this would be a brawl.

BOTH FIGHTERS PAST THEIR PRIME

Lopez went 30 – 0 before losing his  WBO featherweight title back in 2011.  Since then he would go on to lose 4 out of his next 7 fights with two back to back loses coming into Saturday’s fight.  Besides losing his last two fights he had not stepped in the ring professionally for two years.

He stepped in Saturday as the underdog.

Vasquez also came into this fight on the back of two losses but he was the favorite.  Vasquez is known for “Making History” which was the title of the fight he had with Marvin Sonsona.  With the knock out of Sonsona, Vasquez really did make history.  He established the following records:

THINGS GOT HEATED AT THE WEIGH-IN

Although it’s not entirely clear why, (mostly because all the pre-fight interviews are in Spanish) these two dudes did not like each other…..at all.  The weigh-in got heated when Vazquez gets a little too close during the promotion photos and Lopez gives him the two handed “Bitch Get Back” push.

Vasquez was not expecting that at all.  Not only was he surprised but his ego was bruised because he looked a little like a sucker. Looking closely at the weigh in video now, it looks like Vasquez’s trainer is the one that breaks things up.  He’s the guy that Lopez charges at the end of the fight.