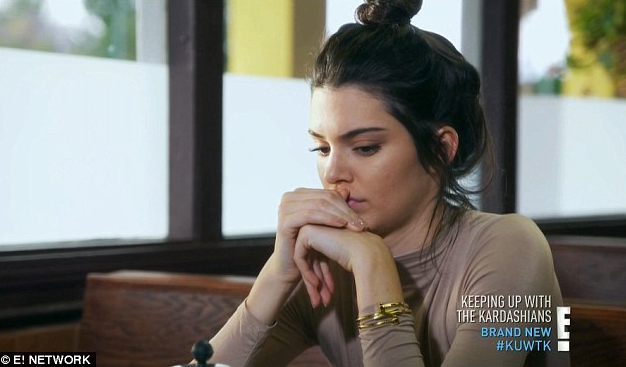 Kendall Jenner’s Mystery Illness, Reveals She Wakes Up In The Middle Of The Night And Can’t Move (VIDEO)

Is Kendall Jenner slowly losing her mind, or does she have a serious mystery illness? No one knows yet. During a special preview of next week’s episode of Keeping Up With the Kardashians, the 20-year-old reality star talked with her mom Kris Jenner on the phone.

She tells her mother, “I wake up in the middle of the night and I can’t move,” which sounds terrifying and alarming, but Kris didn’t seem to be that worried.

“I think you’ve just got anxiety,” she told Kendall. That response didn’t please the model though. “Everyone says I’m fine, but I don’t feel fine,” she says.

If you’ve been keeping up with the Kardashians, then you know Kendall has struggled with these mystery illness thoughts before. In one of the teasers for the reality show earlier this month, Kendall yelled at her family for not taking her medical issues seriously.

“I’m done arguing with people because I don’t feel fine. I promise one day when I’m rushed to the hospital, then you guys are going to wake up.”

But the truth is, it probably is some form of anxiety. That’s not to say it’s not a serious condition, because it is, but we don’t think she’s going to die anytime soon.

You’ll remember she admitted to suffering from anxiety, which was mostly triggered by her biggest phobia, trypophobia.

“Trypophobics are afraid of tiny little holes that are in weird patterns. Things that could set me off are pancakes, honeycomb or lotus heads (the worst!). “I can’t even look at little holes – it gives me the worst anxiety. Who knows what’s in there???”

I would say it sounds like she needs to have a long, relaxing vacation…but she takes those like once a month, so that probably wouldn’t help.

Maybe she needs to do the opposite. Lock her bank account, get a job at some fast food restaurant, and then she’ll start to have anxiety about some real sh-t.

Or she might have sleep paralysis. Stress can make it worse.