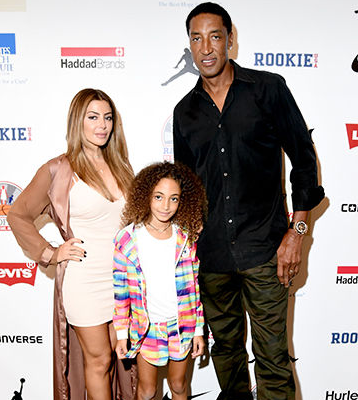 Did Scottie Pippen Get Abusive With His Wife? Listen To The Emotional 911 Call Inside (AUDIO) There has been a lot of drama surrounding Scottie Pippen and his wife Larsa recently. They have been married for nearly 20 years, but the former NBA star filed for divorce last month. At the time, it wasn’t clear what triggered the divorce, but sources are now saying Larsa might have cheated on Pippen with Future.

Those rumors haven’t been confirmed, but they have been seen hanging out together. After the divorce was made public, Larsa sent out a statement to the media and she seemed hopeful that her and Pippen could continue to work together for their children…

“Although they are no longer to be married, Larsa remains hopeful that she and Scottie will always do what is best for their 4 beautiful children and jointly raise them with love and respect.”

That’s an optimistic statement considering she was calling the cops on her husband just a few weeks before. TMZ got an audio recording of the second call she made to 911, and she sounds absolutely terrified while speaking to the operator.

This is not the first time Pippen has been accused of physical abuse. Back in 1995, the 51-year-old was charged with two counts of domestic battery. He allegedly grabbed his former fiancee by the arm and pushed her into a car in the garage.