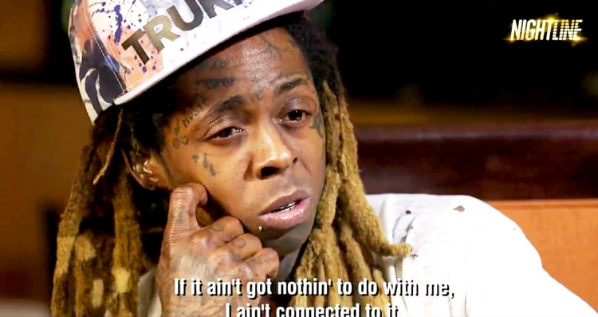 Is Lil Wayne Trolling? Says He Does Not Feel Connected To Black Lives Matter Movement During A Bizarre Interview (VIDEO)

For some reason, Lil Wayne sat down for an interview with ABC News’ Nightline, and the interviewer started asking the rapper some important questions about life and politics.

Which is strange because Wayne has never given anyone the impression that he gives a sh*t about anything. This dude is famous for repeatedly saying, “she lick me like a lollipop,” which is fine! That’s awesome, but why is he being asked these questions?

Questions like, “Do you feel connected with the Black Lives Matter movement?” WHAT DO THEY EXPECT? SOME BRILLIANT ANSWER THAT SOLVES ALL THE WORLD’S PROBLEMS?

No. They’re going to get some stupid answer that doesn’t make sense to anyone except Lil Wayne.

“That just sounds weird, I don’t know that you put a name on — it’s not a name; it’s not ‘whatever, whatever.’ It’s somebody got shot by a policeman for a f–ked up reason. I am a young, black, rich motherf–ker. If that don’t let you know that America understand black motherf–king lives matter these days, I don’t know what it is. I don’t feel connected to a damn thing that ain’t got nothin’ to do with me.”

Can you respond to that? I’ve been trying to figure out how, and I am coming up with a bag full of nothing. It’s hard to believe he’s that stupid, which makes me believe he is just trolling everyone to make the headlines.

Because it’s certainly working. He’s been trending on Twitter all day. Check out some of these tweets… But really, don’t waste your energy by getting upset over this. I am 99% sure he’s either trolling, or too far gone to even understand what’s going on in the world.

I mean just a few months ago he was screaming “BLACK LIVES MATTER” at a concert. He’s simply following the money.