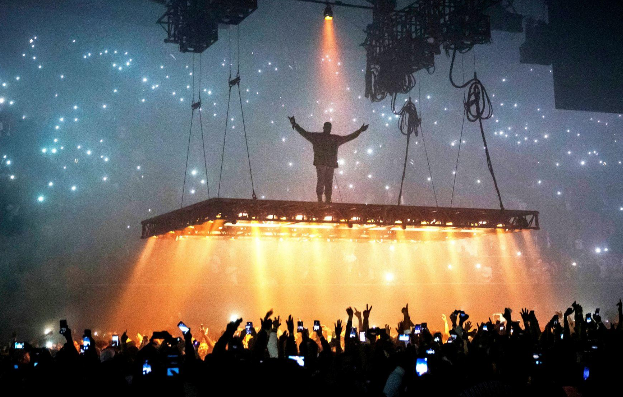 Boos Pour Over Kanye West After He Ends Show Early Because He Was Losing His Voice: “I’ll Do Better Next Time” (VIDEO)

It’s not a good night for an entertainer when they’re getting booed during their own performance. That’s what happened to Kanye West on Thursday night. He was right at the end of an insane portion of his concert schedule, which had him performing seven shows in just nine nights.

After struggling to perform 45 minutes of his set at The Forum, Kanye West stopped the show and told the huge crowd that he couldn’t finish, “My voice is so hoarse. I can’t finish the show…I can’t let y’all have a show where I can’t perform for you.”

And when the crowd discovered he was serious, they started to shower him with boos. There are even a few “what the f**ks” thrown in there, because what would the world be without some angry white girl yelling, “WHAT THA F**K?”

As he left the stage, some people in the crowd started chanting his name. He responded, “I’m very sorry. I love you. I’ll give everyone a refund. I’ll do better next time.”

So that’s the good news. Everyone is going to get a refund. The bad news is they didn’t get to see Kanye perform his full set, which has to be disappointing. His tour has been getting great reviews, and he clearly worked hard to make everything perfect for his fans.

During an interview with E! News, West talked about taking the concert experience to another level:

Thankfully, Kanye is getting a nice break now. He doesn’t have another show scheduled until November 17, so his body has two weeks to recover.