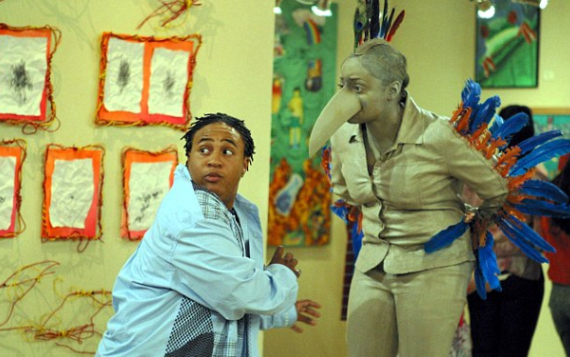 Orlando Brown Gives Another Bizarre Interview: Claims Prince Had It Coming And Says Kim Kardashian Staged Her Robbery! Is He Speaking The Truth Or Is He Just Crazy? (VIDEO)

The former ‘That’s So Raven‘ star Orlando Brown is slowly becoming my favorite person. At first, I thought he was just another former child star who grew up to be a drug addict, and that’s exactly what happened. However, his bizarre interviews are extremely entertaining, and if you pick out the craziness, you’ll find nuggets of truth.

During a new interview with VLAD TV, the 28-year-old talked about how Prince had it coming. “The devil came and collected,” he said. In addition to hatin’ on a dead guy, Brown also went after Kim Kardashian. He believes the robbery was staged.

“How the f–k she gonna get robbed? Now it would have made more sense had they been like, ‘Oh yeah, well they were trying to get to Kanye,’ now that would have made some sense to me. But don’t tell me that they took your jewelry. And they held you down, bitch they would have killed you, they would have raped you, number one. You know what I’m saying? Don’t play with people.”

Brown did show a charitable side during the interview. He has some HUGE plans to help sick kids in America. He’s planning (don’t hold your breath) a ‘Million Kid’ march.

He hopes to raise $10 million so he can write checks to help pay off medical bills for struggling families inside Children’s Hospitals across the country.

He also wants to drop $10 thousand out of a helicopter inside “the ghetto.”

“Gonna make it rain. I want it to be from at least like 12 to 15, make that the cutoff. I don’t want no elbows in that thing. The parents and all them gotta stay on the sidelines. Kids get the money.”

That sounds like a brilliant idea. We’re sure nothing will go wrong there. Not that he’ll actually do it. By the way, for those who actually watched the whole video, did you notice his new favorite word? He said it at least 5-6 times, and I’m pretty sure he only used it correctly 50% of the time.