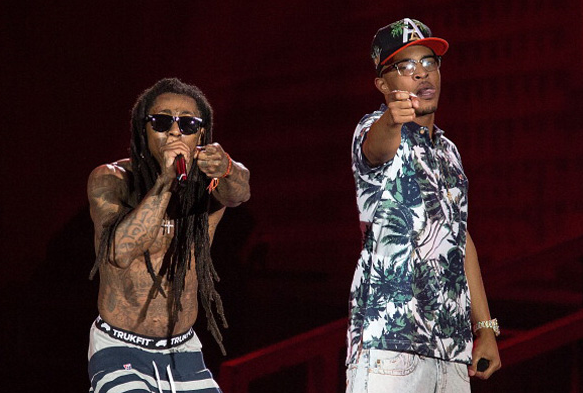 T.I. Goes Off On Lil Wayne For His ‘Black Lives Matter’ Comments: “U MUST STOP this buffoonery & coonin'”

Last week, Lil Wayne shocked everyone with his comments on the ‘Black Lives Matter’ movement during a strange interview with ABC Nightline. If you haven’t seen the clip or read the comments, click on this link and check it out.

Basically, he claimed he didn’t feel connected to the movement and insinuated that since he’s a rich black man, America obviously understands that black lives do matter. He did apologize (kinda) for his comments after receiving  a lot of hate.

He told TMZ the following:

“When the reporter began asking me questions about my daughter being labelled a bitch and a hoe, I got agitated. From there, there was no thought put into her questions and my responses.”

But that explanation wasn’t enough for rapper T.I., he’s had a close relationship with Lil Wayne for years, and he’s extremely disappointed in him.

“Wayne I’ve known you over a decade. Our daughters grew up together practically … I KNOW you wired a bit different than most other responsible adults, but still n—- U TRIPPING!!!! You have to get outta that bubble that you’ve been living in & get out here & educate yourself on what’s going on around US!!! u MUST STOP this buffoonery & coonin’ you out here doin.”

So how did Wayne respond to this? Well, uh…he tweeted this shortly after T.I. posted his message:

You can’t make someone give a sh-t. Lil Wayne doesn’t have any sh-ts left to give. That’s fine. I don’t think the Black Lives Matter movement is dependent on Wayne’s support.

You can’t take the lollipop out of the player.