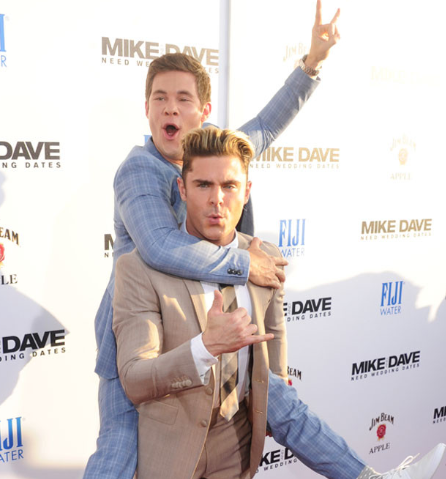 Zac Efron Gives His Buddy Adam DeVine The Best Birthday Present Ever, We Got The Bromantic Video Inside! Who are the best bros in all of Hollywood? The answer we’re looking for is Zac Efron and Adam DeVine. They developed a close relationship with each other while filming their summer comedy Mike and Dave Need Wedding Dates.

Since filming the movie, they have been seen giving each other piggy back rides, kissing on camera, and even sharing personal trainers. That’s when you know things are serious. When you start working out together.

Mr. DeVine turned 33-years-old yesterday, and to help him make it the best birthday ever, Efron decided to serenade him with a special version of Happy Birthday. He was even playing the piano during the song. He went all out.

Obviously we know Efron can sing from his High School Musical days, but some people don’t understand just how good his voice is.

Who remembers this special moment he had with Taylor Swift on Ellen? This is the video that impressed me most.

You’ll be able to hear more of Efron’s voice when he joins Hugh Jackman and Zendaya in Fox’s upcoming musical The Greatest Showman. It’s scheduled to be released Christmas 2017.