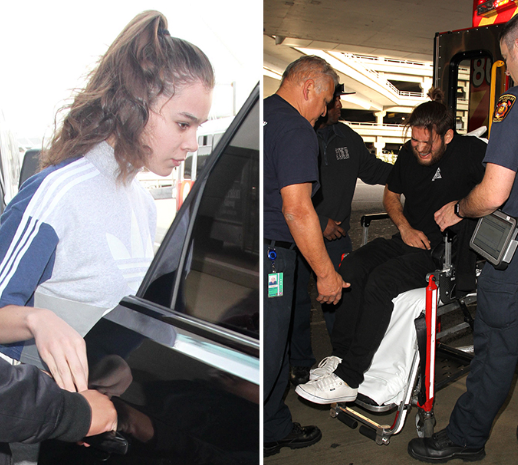 Meet The Most Pathetic Dude Ever: Autograph Seeker Gets Pushed By Hailee Steinfeld’s Bodyguard, And Then Puts On Amazing Performance For Medics (VIDEO)

No matter how terrible/pathetic you think you are, you’ll never be as terrible as the dude you see in the video above. The autograph hound REALLY wanted an autograph from Hailee Steinfeld as she left LAX.

You can see him following her throughout the airport and then outside as she got in her vehicle. Steinfeld’s handler told him several times to back up. She wasn’t going to be handing out any autographs, but the dude continued to harass her, so the handler pushed him away.

It was a mild push. It was the type of push you’d give your friend when they’re acting like an idiot in public. Like, “Hey, bro. Knock it off,” and as you can see in the video, the dude didn’t seem to be injured after the push. In fact, he continued to follow Hailee.

But then, once Hailee was safely inside her vehicle, the dude got the cops involved and pretended to be in a tremendous amount of pain as the paramedics “treated” him in the back of an ambulance.

Bruh, really? Your family is going to see this. You know…sometimes words aren’t enough. We need to respond to this dude in GIFs.