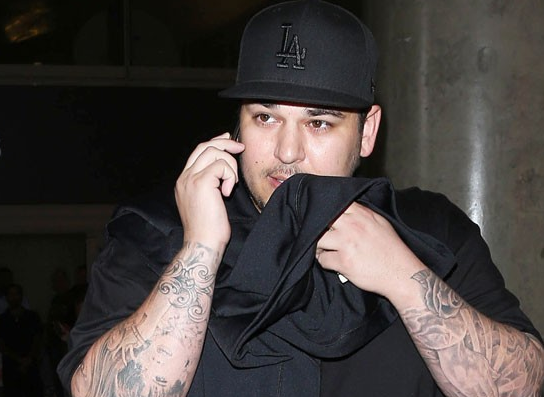 Kris Jenner and Corey Gamble arriving at the hospital.

December has been a month NOT to remember for Rob Kardashian. It’s been a super stressful month. You’ll remember earlier this month he went on his Snapchat/Instagram to report that Blac Chyna had taken their baby and all the food from the house.

“I’m pretty upset, and I’m pretty sad because it’s about to be Christmas, and I want to be with my baby,” he said as he showed his empty house.

He later apologized for reporting the whole thing on social media and admitted he needed some help to work on some personal issues. He promised he would get better for Chyna and their baby, Dream. And that was apparently enough for Chyna because she returned home just three days later.

But the stress didn’t end. The holidays were filled with drama because most of his family hates Chyna, which made for some extremely awkward moments. Sadly, it looks like all the drama is not only damaging Rob’s mental health, but also his physical health. Blac Chyna and Kris Jenner rushed to the emergency room Wednesday night after Rob went into “medical distress.”

According to TMZ, the 29-year-old reality star checked himself into the hospital due to complications connected to his diabetes. He had been doing great with it the past few months, but the past three weeks has made him lose control.

He’s no longer sticking to his diet and has gained an “alarming” amount of weight recently. Last we heard, he was still in the hospital. Doctors are trying to get his numbers in the normal range again.

We wish him all the best. If 2016 takes a f**king Kardashian, it’ll truly be the worst year ever for celeb deaths.